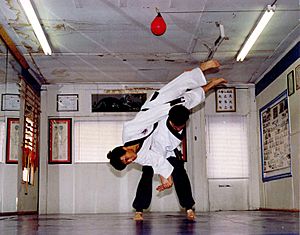 Hapkido students practice throws and joint manipulation in a dojang.

To simple sight it is a combination of techniques of taekwondo with others of aikibudo. Its teaching is very much focused to the self-defence.

The history of hapkido is enough confused, but many resources believe it to be the work of two Koreans: Choi Yong Sul (1904-1986) and Ji Han Jae (1936-). When was child, Choi had been in Japan, where it seems that he worked as servant for the master of Daito ryu Aiki jutsu, Sokaku Takeda.

Choi had demonstrated qualities in Daito-ryu Aiki-jutsu and often in Takeda they sent him in order to face with other persons who performed martial arts. From his return to Korea, Choi had begun to give classes of martial arts. One of his students, Ji Han Jae, had made Korean traditional techniques of kicks and punches (obtained from taekkyon and from hwarangdo) a part of the collection of techniques and in result he gave it the name of hapkido in the 1959.

Besides of Choi and Ji, many schools of Korean martial arts have taken part in the development of several techniques that have helped in causing such hapkido as it is known it.

All content from Kiddle encyclopedia articles (including the article images and facts) can be freely used under Attribution-ShareAlike license, unless stated otherwise. Cite this article:
Hapkido Facts for Kids. Kiddle Encyclopedia.