Kids Encyclopedia Facts
Not to be confused with Taekwondo.

It is characterized by fluid, dynamic foot movement called "pum balgi" or Stepping-on-Triangles. Taekkyon is concerned with applying both the hands and feet at the same time to unbalance, trip, or throw the opponent. Hands and feet are always used together. Taekkyon has many leg and whole-body techniques with fully integrated armwork. A Taekkyon practitioner is called a "Taekkyon-kkun" (태껸꾼) and wears a uniform called "hanbok" (traditional Korean work clothes) although- via images on their website- the World Widae Taekkyon school wears a "dobok," or Korean gi..

Since the twentieth century, Taekkyon has come to be seen as a living link to Korea's past. As such, it has provided historical references for modern Korean martial arts and is often considered as the oldest martial discipline of Korea. 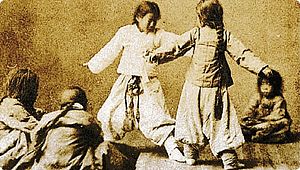 Children of the Late Joseon period playing Taekkyon. This picture is the only contemporary photo of Taekkyon in practice.

Historical records regarding Taekkyon are scant and ambiguous. The term is described as a Martial art -probably descended from earlier dynasties' Subak- or as a folk game. The earliest written source of the term appears during the Joseon Dynasty, in the book Jaemulbo (also Manmulbo), written by Lee Sung-Ji during the reign of King Jeongjo (1776–1800):

The word is written in Hangul, which denotes its connection with the common people while the other terms are written in hanja.

Song Deok-gi (1893–1987) who was the main preserver of Taekkyon during the 20th century, writes in the preface of his only book : "It cannot be said for sure when and how Taekkyon came into existence, but until the end of the Korean kingdom, certain people did Taekkyon together." 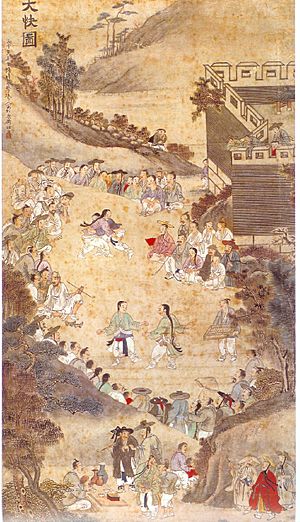 The "Dae kwae do"(대쾌도, 大快圖), painted in 1846 by renowned Hyesan Yu Suk (유숙, 劉淑). It shows Ssireum above and Taekkyon below. Players wear a coat called "Dopo" and ties their clothes together in order to have more freedom of motion. Dopo were only worn by scholars (Seonbi, 선비). Located in Museum of University of Seoul

Taekkyon is documented for the first time in the West as a living martial art by renowned anthropologist Stewart Culin in his book "Korean Games" (1895). In the book "Haedong Jukji" (East Sea Annals) by Choe Yeong-nyeon (최영년) from 1921, Taekkyon is lyrically called "flying leg technique" (bi-gak-sul, 비각술, 飛脚術).

Taekkyon was widely practised during the Joseon period. Two versions existed at the time: one for combat application, the other as a game, very popular among plebs alongside Ssireum. Both combat sports were often done together at festivals, attended by all social classes. For example, during the Dano-Festival, a tournament called Gyeollyeon (결련) was carried out. Players who beat five opponents consecutively could take a rest and re-enter the tournament again later.

Nonetheless, Taekkyon's popularity suffered a lot as Neo-Confucianism became widespread among the elite and underwent a long period of decline. At the dawn of the 20th century, it was only practised around the capital city of Hanyang (Seoul), in the district of Jongro. The subsequent Japanese occupation (1910-1945) prohibited indigenous fighting techniques which nearly made the art extinct.

The onslaught of the subsequent Korean War (1950-1953) left only one surviving Master: Song Deok-gi. Being part of the last generation who received a traditional education, he had maintained his practice in secret throughout the Japanese occupation and subsequently laid the seeds for the art's regeneration. The style he practiced was called Widae (High-village) after his village of Sajik, Jongro district. Song was critical in the preservation of Taekkyon, since most of our actual knowledge comes from him. Revealed to the public on 26 March 1958 after a Martial arts demonstration given for then president Syngman Rhee's birthday, Song became known as "the Last Taekkyon Master of the Joseon Dynasty".

He taught a handful of students who in turn transmitted the art. On June 1, 1983, Taekkyon was given the classification as Important Intangible Cultural Asset No. 76" by the Korean government (중요무형문화재 제76호). It is only one of two Korean martial arts which possesses such a classification. Song Deok-gi was subsequently given living national treasure status by the South Korean government. Since then, Taekkyon has been enjoying a renaissance with the establishment of university clubs, the opening of new schools and active promotional efforts from the government and associations alike. On June 30, 1985, the first Taekkyon tournament since 70 years was held in Busan.

Song Deok-Gi died on 23 July 1987, at the age of 94. In November 2011, Taekkyon was recognized by UNESCO and placed on its Intangible Cultural Heritage List, being honored as the first martial art on UNESCO's list, the other being Ssireum.

Taekkyon utilizes a wide variety of techniques including kicks, fist, knee and elbow strikes, pressure point attacks, throws, joint locks, head butt and grapples. The whole body is used in each movement. The most unique feature of Taekkyon is its triangular foot work called pumbalkki (품밟기) which looks like a dance. The meaning of pumbalkki is "to step the pum". Pum refers to the triangular look of the hanja 品, as pumbalkki has a triangular form as well. The hanja pum means "level" or "goods", but it is used only because of its shape, not because of its meaning. Modern Taekkyon schools teach a great variety of kicks, low, medium, and high, as well as jumps. Sweeps with straight forward low kicks using the ball of the foot and the heel and flowing crescent-like high kicks. There are many kicks that move the leg outward from the middle, which is called gyeot chagi, and inward from the outside using the side of the heels and the side of the feet. The art also uses tricks like inward trips, wall-jumping, fake-outs, tempo, and slide-stepping. The basic steps are geometric and at the core of all advanced movement. All movements are natural to the human body.

The movements of Taekkyon are fluid with the practitioners constantly moving. One of its most striking characteristics is the motion called gumsil or ogeum jil: It is a constant bending and stretching of one's knees, giving the art a dance-like appearance. This motion is also used in the Korea mask dance talchum, so both arts look similar in a way: the art is like a dance in which the fighter constantly changes stance from left to right by stepping forward and backwards with arms up and ready to guard, blending arm movements with leg. Taekkyon does not make use of abrupt knee motions. The principles and methods used to extend the kick put more emphasis on grace and alignment for whole-body strength, as with the arm motions.

Although Taekkyon primarily utilizes kicking, punching, and arm strikes thrown from a mobile stance and does not provide a framework for groundfighting, it does incorporate a variety of different throws, takedowns, and grappling techniques to complement its striking focus.

There are evolving forms in Taekkyon. One form can be performed many different ways with its variations over the basic ten-year training period. The curriculum is adjustable within the traditional system. Masters may create their own personalized approach for teaching the basic Taekkyon system.

As a competitive martial art / competition 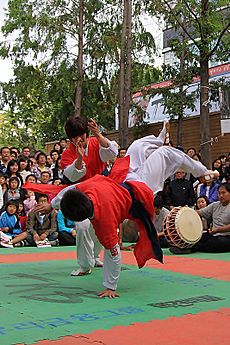 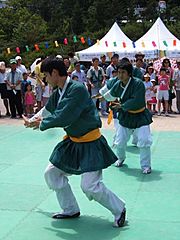 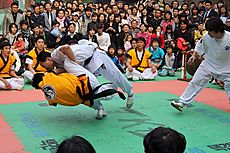 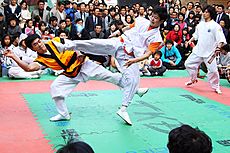 When Taekkyon is practiced in competition, it uses a limited subset of techniques, focusing on grappling and kicking only. Points are scored by throwing (or tripping) the opponent to the ground, pushing them out of the ring, or kicking them in the head. There are no hand strikes or headbutts, and purposefully injuring your opponent is prohibited. The head kicks are often quite sharp, but usually not full force, and fighters may not attempt to wear the opponent down with body blows as in western Boxing or Muay Thai. Matches are sometimes decided by the best of three falls—the first fighter to score two points wins. However, different modern associations employ slightly different rules. To an untrained eye, the matches are cautious but exhilarating affairs. The contestants circle each other warily, changing their footwork constantly using pumbalkki and feinting with low kicks, before exploding into a flurry of action which might leave one fighter flat on their back.

Various Taekkyon organisations currently exist in Korea. These include:

Medieval records mention that several street fighting games and techniques existed in Korea at the time, up until the twentieth century. Due to the elite's scorn and contempt for martial activities, Taekkyon came to be perceived as a fighting method for thugs and sometimes confused with such disciplines: Sibak (시박), Pyeonssaum (편싸움), Nalparam (날파람), Nanjanbaksi (난잔박시), Taegyeok (태격)... Some barehand techniques for street fighting are currently taught as part of the curriculum of the three modern schools as part of the "Yetbeop Taekkyon" or "Old style Taekkyon".

There is a common modern myth about Taekkyon being depicted as a kicking game as well as an "ancient version of Taekwondo" in the public eye. This is mainly due to the spread of Taekwondo as the national martial sport of Korea after the Korean War. Since then, Taekkyon has been known to the general public mainly through Taekwondo's association and rendition based on incomplete information via bits and pieces of records emphasizing its kicking techniques. Even though the Taekwondo establishment claims an ancient lineage through Taekkyon, and even partially modeled its name on it, the two disciplines don't have much in common. In fact, Taekkyon associations do not acknowledge having any relationship to taekwondo, and explicitly deny any link.

All content from Kiddle encyclopedia articles (including the article images and facts) can be freely used under Attribution-ShareAlike license, unless stated otherwise. Cite this article:
Taekkyeon Facts for Kids. Kiddle Encyclopedia.