Sudbury is a town in Middlesex County, Massachusetts, United States. At the 2010 census, it had a population of 17,659. The town, located in Boston's MetroWest, has a rich colonial history.

The town was incorporated in 1639. At that time, the boundaries of Sudbury included (by 1653) all what is now of Wayland (which split off in 1780), and parts of Framingham, Marlborough, Stow and Maynard (Maynard split off 1871). The Sudbury Center Historic District has changed little since 1800.

Sudbury also contributed the most militia during King Philip's War and was the site of a native raid. Ephraim Curtis was a successful leader of the militia of West Sudbury and would lend his name to the town's junior high school. Sudbury militia participated in the Battle of Lexington and Concord, in 1775, where Sudbury members sniped on British Red Coats returning to Boston.

One of Sudbury's historic landmarks, the Wayside Inn, claims to be the country's oldest operating inn, built and run by the Howe family for many generations. Henry Wadsworth Longfellow wrote Tales of a Wayside Inn, a book of poems published in 1863. In the book, the poem The Landlord's Tale was the source of the immortal phrase "listen my children and you shall hear, of the midnight ride of Paul Revere." Henry Ford bought the inn in 1923, restored it and donated it to a charitable foundation which continues to run it as an operating inn to this day. Ford also built a boys' school on the property, as well as a grist mill, and the Martha–Mary Chapel. He brought in the Redstone Schoolhouse from Sterling, which was reputed to be the school in Sarah Josepha Hale's nursery rhyme Mary Had a Little Lamb. However, Giuseppi Cavicchio's refusal to sell his water rights scuttled Henry Ford's plans to build an auto parts factory at the site of Charles O. Parmenter's mill in South Sudbury.

In the period after World War II, Sudbury experienced rapid growth in population and industry. Defense contractor Raytheon became a major employer after opening a large research facility in Sudbury in 1958. Another major employer in that period was Sperry Rand. In the 1970s, the town was home to many of the engineers working in the minicomputer revolution at Digital Equipment Corporation in nearby Maynard. Sudbury was also one of the largest carnation-growing towns, with many greenhouse operations.

Residentially, Sudbury's 1-acre (4,000 m2) zoning bylaws helped the town maintain a more rural character through the 1970s and 1980s, when developments of single-family Colonials and large Capes established it as an affluent location. Commercial growth was restricted to the town's main thoroughfare, US Route 20, and significant tracts of open space—including much wetland—were preserved in the northern half of town. As subdivisions of large homes continued to be constructed well into the 1990s, Sudbury became one of the wealthiest towns in Massachusetts.

Contrary to local legend, the town's ZIP code of 01776 was not specially assigned in recognition of the town's historical connections to the Revolutionary War, according to the Sudbury Historical Society. 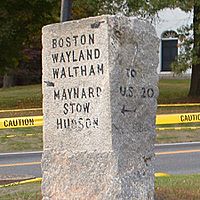 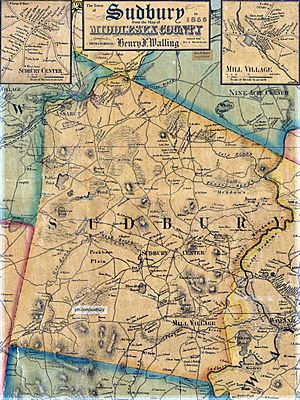 According to the United States Census Bureau, the town has a total area of 24.6 square miles (64 km2), of which 24.4 square miles (63 km2) is land and 0.3 square miles (0.78 km2), or 1.06%, is water. The highest point in Sudbury is on the north slope of Nobscot Hill, and the highest summit is Tippling Rock, which commands a great view of the west of Boston and the tops of the Hancock and Prudential buildings in downtown.

Sudbury is bordered by Wayland (the Sudbury River) on the east; Framingham on the south; Hudson, Maynard, Marlborough, and Stow on the west; Concord on the northeast; and Acton on the north. A larger town, Sudbury also shares a common corner with Lincoln, with which it shares a regional high school, Lincoln-Sudbury High School. Sudbury is 20 miles (32 km) west of Boston, 26 miles (42 km) east of Worcester, and 194 miles (312 km) from New York City.

Sudbury is located in eastern Massachusetts, bordered by several towns:

There were 5,504 households out of which 51.1% had children under the age of 18 living with them, 78.5% were married couples living together, 6.2% had a female householder with no husband present, and 13.7% were non-families. 11.0% of all households were made up of individuals and 5.5% had someone living alone who was 65 years of age or older. The average household size was 3.02 and the average family size was 3.28.

Sudbury was ranked in 2005 as the best town in Massachusetts in which to raise a family. 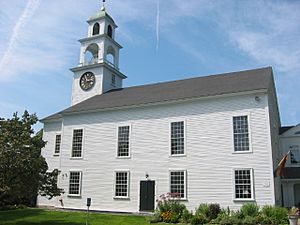 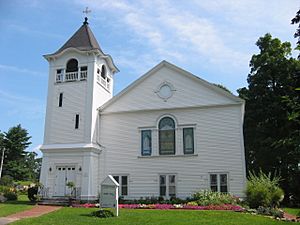 All content from Kiddle encyclopedia articles (including the article images and facts) can be freely used under Attribution-ShareAlike license, unless stated otherwise. Cite this article:
Sudbury, Massachusetts Facts for Kids. Kiddle Encyclopedia.