Mary Had a Little Lamb facts for kids

"Mary Had a Little Lamb" is an English language nursery rhyme of nineteenth-century American origin. It has a Roud Folk Song Index number of 7622. 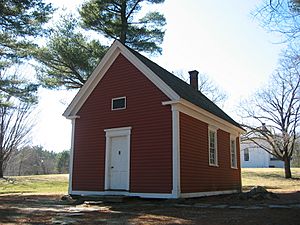 The Redstone School (1798), now in Sudbury, Massachusetts, is believed to be the schoolhouse mentioned in the nursery rhyme.

The nursery rhyme was first published by the Boston publishing firm Marsh, Capen & Lyon, as a poem by Sarah Josepha Hale on May 24, 1830, and was possibly inspired by an actual incident.

There are competing theories on the origin and inspiration of this poem. One holds that John Roulstone wrote the first four lines and that the final twelve lines, less childlike than the first, were composed by Sarah Josepha Hale; others claim that Hale was responsible for the entire poem.

As a young girl, Mary Sawyer (later Mary Tyler) kept a pet lamb that she took to school one day at the suggestion of her brother. A commotion naturally ensued. Mary recalled: "Visiting school that morning was a young man by the name of John Roulstone, a nephew of the Reverend Lemuel Capen, who was then settled in Sterling. It was the custom then for students to prepare for college with ministers, and for this purpose Roulstone was studying with his uncle. The young man was very much pleased with the incident of the lamb; and the next day he rode across the fields on horseback to the little old schoolhouse and handed me a slip of paper which had written upon it the three original stanzas of the poem..."

Mary Sawyer's house, located in Sterling, Massachusetts, was destroyed by arson on August 12, 2007. A statue representing Mary's Little Lamb stands in the town center. The Redstone School, which was built in 1798, was purchased by Henry Ford and relocated to a churchyard on the property of Longfellow's Wayside Inn in Sudbury, Massachusetts.

In the 1830s, Lowell Mason set the nursery rhyme to a melody adding repetition in the verses: 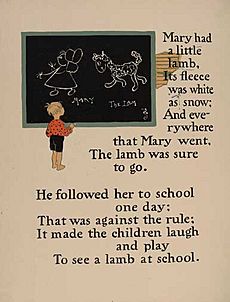 William Wallace Denslow's illustrations for Mary had a little lamb, from a 1901 edition of Mother Goose

The rhyme was the first audio recorded by Thomas Edison on his newly invented phonograph in 1877. It was the first instance of recorded verse. In 1927, Edison reenacted the recording, which still survives. The earliest recording (1878) was retrieved by 3D imaging equipment in 2012.

Blues musicians Buddy Guy and Stevie Ray Vaughan both recorded the song: Guy composing his own bluesy version of the song for his album A Man and the Blues in 1968 and Vaughan covering Guy's version in his 1983 debut album, Texas Flood, with both also infusing the first four lines of the nursery rhyme, "A-Tisket, A-Tasket", into the song. In 1972, Paul McCartney released a version of the song. Just as he had done with the 16th-century poem Golden Slumbers which was released on The Beatles' Abbey Road LP in 1969, he added his own melody to the lyrics. The single was a top 20 hit in Britain although both the choice for and the saccharine arrangement of "Mary Had a Little Lamb" did much to erode his standing with leading rock journalists. McCartney played the song during Wings' 1972 summer tour and it was included in the Spring 1973 James Paul McCartney television special. It is commercially available on the 1993 CD issue of the Wings Wild Life LP.

Uses of the music

The song is used in:

All content from Kiddle encyclopedia articles (including the article images and facts) can be freely used under Attribution-ShareAlike license, unless stated otherwise. Cite this article:
Mary Had a Little Lamb Facts for Kids. Kiddle Encyclopedia.