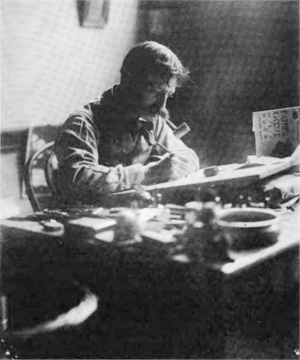 William Wallace Denslow (5 May 1856 – 27 May 1915) is known as W. W. Denslow. He was an American illustrator and caricaturist. He was born in Philadelphia. He had some art school training, but he was mostly self-taught. He designed books and posters. Denslow illustrated L. Frank Baum's The Wonderful Wizard of Oz and other books by Baum. They parted after a quarrel over copyright royalties.

Denslow illustrated Denslow's Mother Goose in 1901, and Denslow's Night Before Christmas in 1902. He illustrated the 18-volume Denslow's Picture Books series in 1903–04. He drew comic strips with Father Goose, the Scarecrow, and the Tin Woodman as characters. He created the comic strip "Billy Bounce". Billy was one of the first comics characters with superpowers. Denslow bought Buck's Island, Bermuda. He crowned himself King Denslow I. He was married three times and had one son. He died in New York City of pneumonia.

All content from Kiddle encyclopedia articles (including the article images and facts) can be freely used under Attribution-ShareAlike license, unless stated otherwise. Cite this article:
William Wallace Denslow Facts for Kids. Kiddle Encyclopedia.