The Scarecrow is a character in the fictional Land of Oz created by American author L. Frank Baum and illustrator W.W. Denslow. In his first appearance, the Scarecrow reveals that he lacks a brain and desires above all else to have one. In reality, he is only two days old and merely naïve. Throughout the course of the novel, he proves to have the brains he seeks and is later recognized as "the wisest man in all of Oz," although he continues to credit the Wizard for them. He is, however, wise enough to know his own limitations and all too happy to hand the rulership of Oz, passed to him by the Wizard, to Princess Ozma, and become one of her trusted advisors, though he typically spends more time having fun than advising.

In The Wonderful Wizard of Oz

In Baum's classic 1900 novel The Wonderful Wizard of Oz, the living scarecrow encounters Dorothy Gale in a field in the Munchkin Country while she is on her way to the Emerald City. He tells her about his creation and of how he at first scared away the crows, before an older one realised he was a straw man, causing the other crows to start eating the corn. The old crow then told the Scarecrow of the importance of brains. The "mindless" Scarecrow joins Dorothy in the hope that The Wizard will give him a brain. They are later joined by the Tin Woodman and the Cowardly Lion. When the group goes to the West, he kills the Witch's crows by breaking their necks. He is torn apart by the Flying Monkeys and his clothes thrown up a tree, but when his clothes are filled with straw he is back again. After Dorothy and her friends have completed their mission to kill the Wicked Witch of the West, the Wizard gives the Scarecrow brains (made out of bran, pins and needles – in reality a placebo, as he has been the most intelligent of the group all along). Before he leaves Oz in a balloon, the Wizard appoints the Scarecrow to rule the Emerald City in his absence. He accompanies Dorothy and the others to the palace of the Good Witch of the South Glinda, and she uses the Golden Cap to summon the Winged Monkeys, who take the Scarecrow back to the Emerald City.

His desire for a brain notably contrasts with the Tin Woodman's desire for a heart, reflecting a common debate between the relative importance of the mind and the emotions. Indeed, both believe they have neither. This philosophical debate between the two friends as to why their own choices are superior; neither convinces the other, and Dorothy, listening, is unable to decide which one is right. Symbolically, because they remain with Dorothy throughout her quest, she is provided with both and need not select. 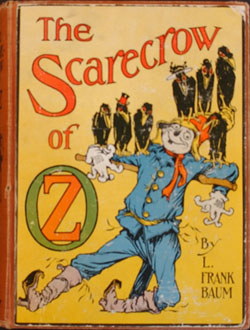 Cover of The Scarecrow of Oz (1915) by L. Frank Baum; illustration by John R. Neill

The Scarecrow also appears in other Oz books, sharing further adventures with Dorothy and her friends. His reign as king of the Emerald City ends in The Marvelous Land of Oz when General Jinjur and her Army of Revolt oust him in a coup. He manages to escape the palace and joins Tip and his companions in seeking the aid of Glinda the Good. He spars with H. M. Woggle-Bug T. E. on the value of education. Although he claims to be educated himself and to value education, he finds the Woggle-Bug's learning rote and without wisdom. Although he cannot eat, he tells Billina that she might be better cooked and generally seems to favor the use of animals as food, sometimes making snide remarks to that effect to his animal companions, although he himself only gathers nuts and fruit for his traveling companions, such as Dorothy and Tip, to eat.

By The Road to Oz he is acknowledged, at least by the Tin Woodman, to be "probably the wisest man in all Oz," and this is the caption of an illustration, suggesting that the reader take his comment at face value. Dorothy herself, in Dorothy and the Wizard in Oz, praises the Scarecrow's wisdom and says the Scarecrow seemed just as wise before the Wizard gave him brains as after. In The Emerald City of Oz, the Scarecrow lives in a house shaped like an ear of corn in Winkie Country. In The Scarecrow of Oz, the Scarecrow travels to Jinxland, where he helps Cap'n Bill, Trot and Button-Bright overthrow the villainous King Krewl. In Glinda of Oz the Scarecrow serves as Regent to Ozma of Oz, demonstrating that he is Ozma's third in command. Mostly all he does is play croquet until Ozma's advisers, including himself, band together for a rescue operation.

In The Royal Book of Oz by Ruth Plumly Thompson, Baum's authorized successor as "Royal Historian of Oz", Professor Woggle-Bug accused the Scarecrow of having no ancestry, so he returns to the pole at the cornfield where he was once hung. Sliding down it and descending underground, he first encounters the Midlings and then the Silver Islands, whose people believe themselves to be the ancestors of the Chinese. Apparently, when Emperor Chang Wang Woe defeated the king of the Golden Islands in battle, the king hired a sorcerer to sneak into the palace and transform the Emperor into a crocus, which later sprouted into a bean pole, preceding a prophecy that the first being to touch the bean pole would become possessed by the spirit of the Emperor. As it turned out, the first thing to touch the pole was the straw-stuffed human, which would become the Scarecrow. This account is not consistent with the Scarecrow's story in The Wonderful Wizard of Oz of becoming aware of each sense as the relevant organs were painted on his head. 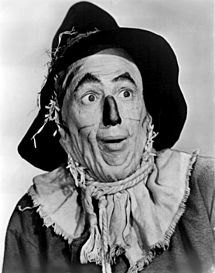 All content from Kiddle encyclopedia articles (including the article images and facts) can be freely used under Attribution-ShareAlike license, unless stated otherwise. Cite this article:
Scarecrow (Oz) Facts for Kids. Kiddle Encyclopedia.