Baum was born in a small town in Chittenango, New York. He was a member of a large family. He started writing as a child. When his father bought his children a simple printing press, Baum and a younger brother wrote and printed a small local newspaper. As a young man, Baum wrote and staged plays. Sometimes he wrote songs for his plays and starred in them himself. He also tried many other careers. He was a travelling salesman and a storekeeper for a time. He started a newspaper while he lived in a town in South Dakota. He married in 1882. He and his wife, Maud Gage Baum, raised four sons. Baum had a very good imagination. He liked creating stories for his young sons and their friends.

When he became 40 years old and was living in Chicago, Baum started writing children's books. These books were often based on the stories he had told to children over many years. After several successes in the late 1890s, Baum published what he called an "American fairy tale," The Wonderful Wizard of Oz, in 1900. The book had pictures drawn by the American artist W. W. Denslow. Baum had to pay for the first Oz book himself. No Chicago publisher wanted to publish The Wonderful Wizard of Oz. One man even told Baum that if people had wanted to read this kind of book, it would already have been written.

But the first Oz book was a big success. Baum was able to give up other business ideas and make enough money to live on by writing children's books. The children who read his books often wrote to Baum, and asked him to write more about Oz. This caused Baum to begin a series of books set in the fantasy land of Oz. In time, Baum grew tired of the series. He tried to end it but his child readers kept demanding that he continue. Baum met their demands through the rest of his life. He wrote 14 Oz books in all. The last two were printed after his death in 1919.

Baum also wrote a large number of books other than the Oz series. He was proudest of his fantasies for children, but he also wrote many other kinds of popular works. He used many pen names for these works.

Baum's children's books were illustrated with pictures by different artists. After the first Oz book, all the rest in the series had pictures by John R. Neill.

Baum made a good income from his books. He spent time travelling around the world with his wife. They settled in Hollywood, California, and Baum made movie versions of some of his Oz books. He also produced stage versions of them. But his businesses were not always successful. In time, Baum had to declare bankruptcy. He was smart enough to put his house in his wife's name, so that they did not lose their home in the bankruptcy. 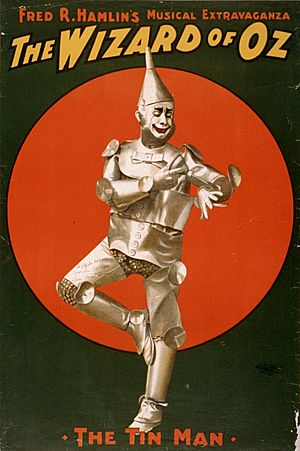 1903 poster of Dave Montgomery as the Tin Man in Hamlin's musical stage version.

Some other Baum fantasies

All content from Kiddle encyclopedia articles (including the article images and facts) can be freely used under Attribution-ShareAlike license, unless stated otherwise. Cite this article:
L. Frank Baum Facts for Kids. Kiddle Encyclopedia.