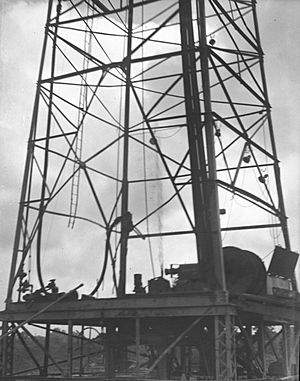 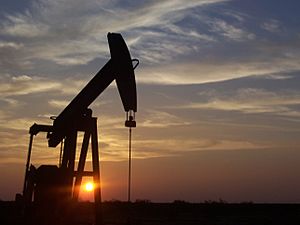 The pumpjack, such as this one located south of Midland, Texas, is a common sight in West Texas

Oil well is a well to get petroleum from the ground. People in the petroleum industry look for a place that might have oil. They drill a hole deep in the ground and, if the oil is there, then pump it up from the hole. Most oil is very deep underground.

Oil wells can be classified by purpose:

Active wells can also be categorized as:

Wells may be straight holes, or directionally drilled:

All content from Kiddle encyclopedia articles (including the article images and facts) can be freely used under Attribution-ShareAlike license, unless stated otherwise. Cite this article:
Oil well Facts for Kids. Kiddle Encyclopedia.