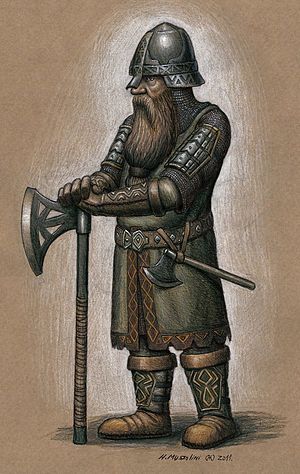 A drawing of a dwarf

A dwarf is a short, humanlike creature from Norse and Germanic mythologies. They have been used in many fairy tales, fantasy, fiction and role-playing games.

In some stories, dwarves are mean, living under bridges, and having a bad reputation for stealing treasure. One example is the Norwegian Troll. It is an ugly and foolish creature who tells lies. It causes problems everywhere it goes. That is how the Internet troll got its name. In Robert Louis Stevenson's story, "Strange Case of Dr. Jekyll and Mr. Hyde," Edward Hyde is described as "a dwarf."

On the other hand, J. R. R. Tolkien's hobbits and the munchkins in The Wizard of Oz are likeable, honest, good and smart.

All content from Kiddle encyclopedia articles (including the article images and facts) can be freely used under Attribution-ShareAlike license, unless stated otherwise. Cite this article:
Dwarf (mythology) Facts for Kids. Kiddle Encyclopedia.