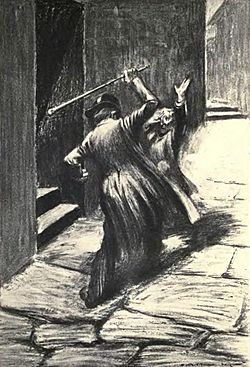 Strange Case of Dr Jekyll and Mr Hyde is a book by Robert Louis Stevenson. It was published in 1886. The book has been adapted to movies, comic books, and other media.

Dr Henry Jekyll is a respected doctor. He believes that man has both good and evil sides. He creates a serum of a special drug. It is supposed to separate the two different sides. He tests it on himself. The experiment succeeds all too well. Dr Jekyll changes into his evil self, Edward Hyde. Hyde commits horrible crimes in London, and changes back into Dr Jekyll. Eventually, Jekyll turns into Hyde without wishing to, with terrible consequences.

The novel is a variation on the theme of "scientist meddling with nature comes to grief". 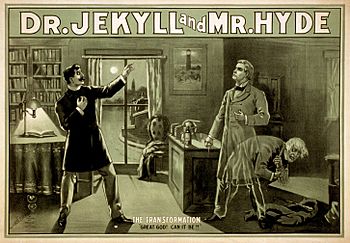 All content from Kiddle encyclopedia articles (including the article images and facts) can be freely used under Attribution-ShareAlike license, unless stated otherwise. Cite this article:
Dr Jekyll and Mr Hyde Facts for Kids. Kiddle Encyclopedia.