Queer Visitors from the Marvelous Land of Oz facts for kids

Kids Encyclopedia Facts
This page is about the newspaper comic strip written by L. Frank Baum. For the novel written by Martin Gardner, see Visitors from Oz. 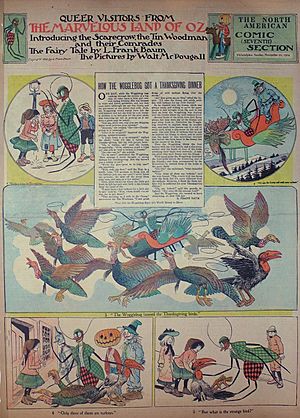 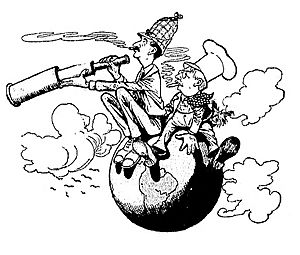 Queer Visitors from the Marvelous Land of Oz was a newspaper comic strip written by L. Frank Baum and illustrated by Walt McDougall, a political cartoonist for the Philadelphia North American. Queer Visitors appeared in the North American, the Chicago Record-Herald and other newspapers from 28 August 1904 to 26 February 1905. The series chronicles the misadventures of the Scarecrow, the Tin Woodman, the Woggle-Bug, Jack Pumpkinhead, and the Sawhorse, as the Gump flies them to various cities in the United States. The comic strip in turn produced its own derivation, The Woggle-Bug Book (1905).

The Visitors from Oz, published by Reilly and Lee in 1960, includes about half of Baum's Visitors stories rewritten and illustrated by Dick Martin.

The 27 Queer Visitors stories have been republished in book form as The Third Book of Oz (1989) from Buckethead Enterprises, which was censored. The Buckethead Edition was a reprint under a new cover of an earlier edition, and Dulabone was not aware at the time that it was censored. The Third Book of Oz also includes another early promotion project, "The Woggle-Bug Book" (written by Baum and illustrated by Ike Morgan); the volume is illustrated by Eric Shanower. Hungry Tiger Press corrected the censoring from the Buckethead edition but used The Visitors from Oz as the title, like the 1960 adaptation.

All content from Kiddle encyclopedia articles (including the article images and facts) can be freely used under Attribution-ShareAlike license, unless stated otherwise. Cite this article:
Queer Visitors from the Marvelous Land of Oz Facts for Kids. Kiddle Encyclopedia.