Jonathan Southworth Ritter (September 17, 1948 – September 11, 2003) was an American actor and comedian. He was a son of the singing cowboy star Tex Ritter and the father of actors Jason Ritter and Tyler Ritter. Ritter was known for playing Jack Tripper on the ABC sitcom Three's Company (1977–1984), for which he received a Primetime Emmy Award and a Golden Globe Award in 1984. He briefly reprised the role on the spin-off Three's a Crowd, which aired for one season.

In 2002, Don Knotts called Ritter the "greatest physical comedian on the planet". His final roles include voicing the title character on the PBS children's program Clifford the Big Red Dog (2000–2003), for which he received four Daytime Emmy Award nominations, and as Paul Hennessy on the ABC sitcom 8 Simple Rules (2002–2003). Ritter experienced discomfort during a rehearsal for the latter on the afternoon of September 11, 2003 and died later that evening of an aortic dissection at the age of 54. 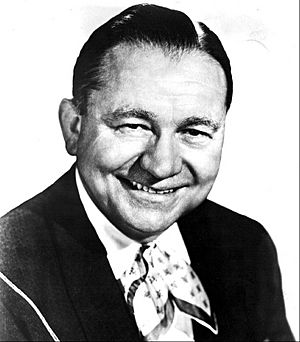 Publicity photo of Tex Ritter, who is the father of actor John Ritter 1966

Ritter was born at the Providence Saint Joseph Medical Center in Burbank, California, on September 17, 1948. Ritter had a birth defect known as a coloboma in his right eye. His father, Tex Ritter, was a singing cowboy/matinee star, and his mother, Dorothy Fay (née Southworth), was an actress. He had an older brother, Thomas Matthews "Tom" (b. January 8, 1947). Ritter attended Hollywood High School, where he was student body president.

He attended the University of Southern California and majored in psychology with plans to have a career in politics. He later changed his major to theater arts and attended the USC School of Dramatic Arts (formerly School of Theatre). Ritter was a member of Phi Gamma Delta fraternity at USC. While still in college, Ritter traveled to the United Kingdom, the Netherlands, and West Germany to perform in plays. Ritter graduated in 1971. 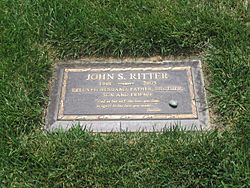 On September 11, 2003, Ritter suffered from heart problems while rehearsing for 8 Simple Rules for Dating My Teenage Daughter. He began sweating profusely and vomiting, and complained of having chest pains. He was taken across the street to the Providence Saint Joseph Medical Center, by coincidence the same hospital where he was born. Physicians misdiagnosed Ritter and treated him for a heart attack; however, his condition worsened. Physicians then diagnosed Ritter with an aortic dissection, a tear in the aorta that grows. Ritter died during surgery to repair the dissection, six days before his 55th birthday.

All content from Kiddle encyclopedia articles (including the article images and facts) can be freely used under Attribution-ShareAlike license, unless stated otherwise. Cite this article:
John Ritter Facts for Kids. Kiddle Encyclopedia.