Winkler was born on October 30, 1945 in New York City, New York. His parents were Ilse Anna Maria (née Hadra), and Harry Irving Winkler, a lumber company executive. Winkler's parents emigrated from Germany to the United States in 1939, before the beginning of World War II.

Winkler is best known for his role as Fonzie on the 1970 American sitcom Happy Days. Fonzie was a leather-clad greaser and an auto mechanic. The character started as a minor character, but became more important before the show's end.

In October 2008, Winkler appeared in a video with Ron Howard, again playing their roles of Fonzie and Richie Cunningham, trying to make people vote for Barack Obama. The video was called "Ron Howard's Call to Action". It also featured the late Andy Griffith. 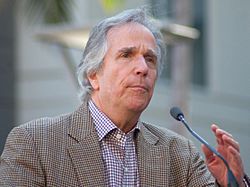 As of June 2010, Winkler has appeared on the USA show Royal Pains.

As of the summer/fall 2010 season, Winkler has joined the cast in the Adult Swim web series Children's Hospital playing a hospital administrator.

On May 31, 2011, Winkler's book, I've Never Met an Idiot on the River. It shows Winkler's love of flying and fishing.

In 2011, Winkler guest-starred as Ambush Bug in the series finale of Batman: The Brave and the Bold.

Winkler appeared in the movie Here Comes the Boom (released October 12, 2012), as the music teacher at Wilkinson High School.

In September 2011, Winkler was made an honorary Officer of the Order of the British Empire (OBE) "for services to children with special educational needs and dyslexia in the UK."

Winkler has been married to Stacey Weitzman since May 5, 1978. They have two children; Zoe Emily (b. 1980) and Max Daniel (b. 1983). Winkler also has a stepson from Weitzman's last marriage to Howard Weitzman.

Some of the movies he was in

All content from Kiddle encyclopedia articles (including the article images and facts) can be freely used under Attribution-ShareAlike license, unless stated otherwise. Cite this article:
Henry Winkler Facts for Kids. Kiddle Encyclopedia.