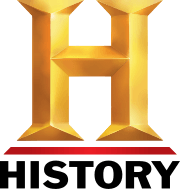 History is an international satellite and cable TV channel that broadcasts historical programs, both fictional and non-fictional. The TV channel is available in many countries. It is seen by more than 80 million households. Because it shows a lot of programs on World War II, it has been jokingly called "The Hitler Channel". It also broadcast programs that try to foretell the future. The History Channel was started by A&E Television Networks on January 1, 1995. A&E Television Networks is a joint-venture between:

On March 20, 2008, The History Channel dropped "The" and "Channel" from its name to become simply "History".

All content from Kiddle encyclopedia articles (including the article images and facts) can be freely used under Attribution-ShareAlike license, unless stated otherwise. Cite this article:
History (TV channel) Facts for Kids. Kiddle Encyclopedia.