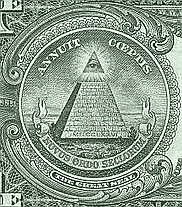 People in the US commonly associate this image with a conspiracy theory involving the Illiuminati or the Freemasons.

A conspiracy theory is a story that says that a group of people ("conspirators") have agreed ("conspired") to do illegal or evil things and hide them from the public. Conspiracy theories usually have little or no evidence, although some have been found to have elements of truth once more evidence has been uncovered. Many conspiracy theories say that certain historical events were actually caused by such conspirators.

All content from Kiddle encyclopedia articles (including the article images and facts) can be freely used under Attribution-ShareAlike license, unless stated otherwise. Cite this article:
Conspiracy theory Facts for Kids. Kiddle Encyclopedia.