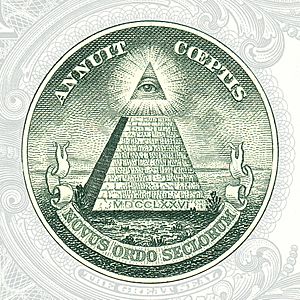 The Eye of Providence is often said to be a symbol of the Illuminati. It is on top of the pyramid on the back of the US $1 bill, the back of the Great Seal, and other official documents

The Illuminati (the “enlightened ones”) was a secret society. Adam Weishaupt, a philosopher and lawyer, created it in 1776. In 1785 it was outlawed in Bavaria.

Illuminati is the name of many groups, modern and historical, real and fictitious, verified and alleged. Most commonly, however, The Illuminati refers specifically to the Bavarian Illuminati.

Most alleged and fictitious uses refer to a shadowy conspiratorial organization which controls world affairs behind the scenes, usually a modern incarnation or continuation of the Bavarian Illuminati. Illuminati is sometimes used synonymously with New World Order (conspiracy).

Since Illuminati literally means 'enlightened ones' in Latin, it is natural that several unrelated historical groups have identified themselves as Illuminati, generally due to claims of gnostic texts or other arcane information not generally available.

The designation illuminati was also in use from the 15th century, assumed by enthusiasts of another type, who claimed that the illuminating light came from within, the result of exalted consciousness, or "enlightenment".

All content from Kiddle encyclopedia articles (including the article images and facts) can be freely used under Attribution-ShareAlike license, unless stated otherwise. Cite this article:
Illuminati Facts for Kids. Kiddle Encyclopedia.