Billy Bob Thornton (born August 4, 1955) is an American actor, screenwriter, director, singer and musician. Thornton first became known for his acting on the CBS sitcom Hearts Afire and in a number of early 1990s movies. These movies included On Deadly Ground and Tombstone. In the mid-1990s, after writing, directing, and starring in the independent movie Sling Blade, he won an Academy Award for Best Adapted Screenplay. He had many large movie roles after Sling Blade 's success. These included 1998's Armageddon and A Simple Plan. During the late 1990s, Thornton began a career as a singer-songwriter. He has released three albums. Thorton was the singer in a blues rock band.

Thornton was born in Hot Springs, Arkansas. He is the son of Virginia Roberta (née Faulkner), a psychic, and William Raymond "Billy Ray" Thornton, a high school history teacher and basketball coach. His father died when Thornton was 18. He has two younger brothers, Jimmy Don and John David. During his childhood, Thornton lived in both Alpine, Arkansas, and Malvern, Arkansas. He was raised a Methodist. Thorton grew up in a large family in a shack. It did not have electricity nor plumbing. Thornton graduated from high school in 1973. He was good high school baseball player. He tried out for the Kansas City Royals, but was let go after an injury.

In the mid 1980s, Thornton moved to Los Angeles to become an actor. At first, Thornton had a hard time becoming an actor. He worked in telemarketing, offshore wind farming, and fast food management while trying to get acting jobs. He also played drums and sang with South African rock band Jack Hammer. While Thornton worked as a waiter for an event, he served movie director and screenwriter Billy Wilder. Wilder is known for movies that include Double Indemnity and Sunset Boulevard. Thornton talked with Wilder, who told Thornton to think about a career as a screenwriter.

Billy Bob's first role was in 1980's South of Reno. He played a small role as a man in a restaurant. Billy Bob was also in a 1987 episode of Andy Griffith's series Matlock. Another one of Thornton's early roles was on the CBS sitcom Hearts Afire with John Ritter and Markie Post. His role as the villain in the 1992 movie One False Move got him noticed by the critics. He also had small roles in the early 1990s movies Indecent Proposal, On Deadly Ground, Bound by Honor, Grey Knight, and Tombstone. Thornton did what Wilder told him to do. He wrote, directed and starred in the independent movie Sling Blade. Sling Blade was well liked internationally. Thornton's screenplay earned him an Academy Award for Best Adapted Screenplay, a Writers Guild of America Award, and an Edgar Award. His acting in the movie earned him an Oscar and Screen Actors Guild nominations for Best Actor.

In 1998, he played the James-Carville-like Richard Jemmons in Primary Colors. Thornton wrote the movie version of the book All the Pretty Horses as a 2000 movie with the same name. The movie starred Matt Damon and Penélope Cruz. After he was forced to cut more than an hour of the movie, he decided to never direct another movie. Also in 2000, an early script he had written was made into The Gift. It starred Cate Blanchett, Hilary Swank, Keanu Reeves, Katie Holmes, Greg Kinnear, and Giovanni Ribisi. In 2000, he also appeared in Travis Tritt's music video for the song "Modern Day Bonnie and Clyde".

He was in the comic movie School for Scoundrels in 2006. More recent movies include The Astronaut Farmer and the comedy, Mr. Woodcock. In September 2008, Thornton starred in the action movie Eagle Eye with Shia LaBeouf and Michelle Monaghan. Thornton has also said he may want to direct another movie. He may direct a period piece about cave explorer Floyd Collins. The movie would be based on the book Trapped! The Story of Floyd Collins by Robert K. Murray and Roger Brucker. Thornton got a star on the Hollywood Walk of Fame on October 7, 2004. 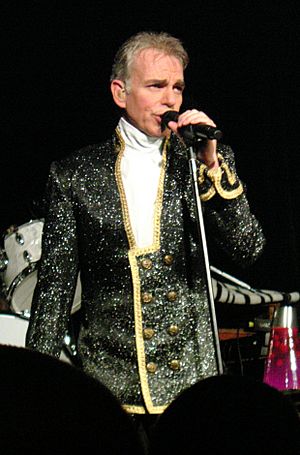 Thornton at a San Francisco concert in 2007

Thornton has been married five times. Each marriage ended in divorce. He has four children by three women. From 1978 to 1980, he was married to Melissa Lee Gatlin. They have a daughter, Amanda. Thornton married actress Toni Lawrence in 1986. They divorced in 1988. From 1990 to 1992, he was married to actress Cynda Williams. In 1993, Thornton married model Pietra Dawn Cherniak. They have two sons, Harry James and William. The marriage ended in 1997.

Thornton was engaged to be married to actress Laura Dern, whom he dated from 1997 to 1999. Instead of marrying Dern, in 2000, he married actress Angelina Jolie. Thornton and Jolie said they were adopting a child from Cambodia in March 2002. Later it was learned that Jolie had adopted the child as a single parent. They separated in June 2002 and divorced the following year.

Since 2003, Thornton has been in a relationship with Connie Angland. They have a daughter, Bella. The family lives in Los Angeles, California. Thornton has said that he likely will not marry again.

All content from Kiddle encyclopedia articles (including the article images and facts) can be freely used under Attribution-ShareAlike license, unless stated otherwise. Cite this article:
Billy Bob Thornton Facts for Kids. Kiddle Encyclopedia.