In the 1990s the term alternative country (which is like the term alternative rock, which was becoming popular at the same time), began to be used to talk about different groups of musicians and singers who did not follow the same traditions of regular country music, and who had a different sound. Many of them did not follow the high production values (such as spending a lot of money in the recording studio) of the big country music industry at the time, which was mostly based in Nashville, Tennessee. 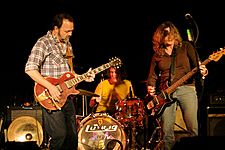 Blue Mountain on stage in 2008

In the 1980s, in southern California, some musicians tried to make some music that had parts of country and parts of punk. This was called the "cowpunk scene". It had bands like Jason and the Scorchers. These styles came together in Uncle Tupelo's popular album No Depression, which came out in 1990. Many people think it was the first alternative country album. A magazine called No Depression later came out that was written about alternative country. The magazine was named after Uncle Tupelo's album. The band made three more important albums and joined a big record label. The band broke up in 1994. Musicians in the band and people around the band later started three other important alternative country bands: Wilco, Son Volt and Bottle Rockets. Bottle Rockets signed, along with acts like Freakwater, The Old 97's and Robbie Fulks, to the Chicago-based indie record label, Bloodshot. They played a type of alternative country called insurgent country. The bands Blue Mountain, Whiskeytown, Blood Oranges and Drive-By Truckers kept going in this direction before most began to move more in the direction of rock music in the 2000s.

All content from Kiddle encyclopedia articles (including the article images and facts) can be freely used under Attribution-ShareAlike license, unless stated otherwise. Cite this article:
Alternative country Facts for Kids. Kiddle Encyclopedia.