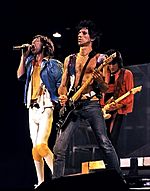 The Rolling Stones had some albums that were thought to be roots rock.

Roots rock is a type of rock music that has folk, blues and country music in it. It was created in the United States during the 1960s. The genre later spread into country rock and southern rock. Some popular artists that played roots rock include Creedence Clearwater Revival, Bonnie Raitt and The Rolling Stones.

All content from Kiddle encyclopedia articles (including the article images and facts) can be freely used under Attribution-ShareAlike license, unless stated otherwise. Cite this article:
Roots rock Facts for Kids. Kiddle Encyclopedia.