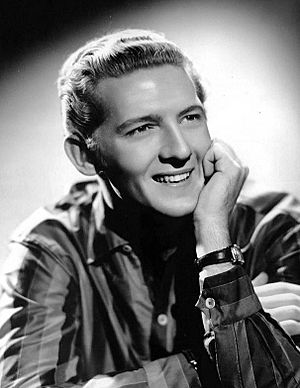 Gene Vincent was a rockabilly musician who wore black leather and sang songs about getting into trouble. Vincent's most popular song is “Be-Bop-A-Lula”. Eddie Cochran wrote songs about teen life, and had hit songs like “Summertime Blues” and “C’mon Everybody.”

Rockabilly became popular again in the 1980s, when bands such as the Stray Cats became popular. In the 1990s and 2000s, there are still many bands playing rockabilly music or music influenced by rockabilly, such as Tiger Army.

All content from Kiddle encyclopedia articles (including the article images and facts) can be freely used under Attribution-ShareAlike license, unless stated otherwise. Cite this article:
Rockabilly Facts for Kids. Kiddle Encyclopedia.