Jerry Lee Lewis (born September 29, 1935) was an American singer-songwriter, musician, and pianist, often known by his nickname, The Killer. He has been described as "rock & roll's first great wild man."

A pioneer of rock and roll and rockabilly music, Lewis made his first recordings in 1956 at Sun Records in Memphis. "Crazy Arms" sold 300,000 copies in the South, but it was his 1957 hit "Whole Lotta Shakin' Goin' On" that shot Lewis to fame worldwide. He followed this with "Great Balls of Fire", "Breathless" and "High School Confidential". 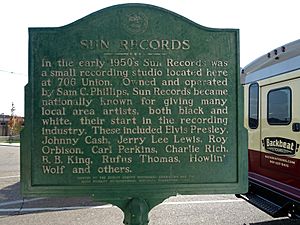 Lewis was born in 1935 to the poor farming family of Elmo and Mamie Lewis in Ferriday, Concordia Parish, in eastern Louisiana. In his youth, he began playing piano with two of his cousins, Mickey Gilley (later a popular country music singer) and Jimmy Swaggart (later a popular television evangelist). His parents mortgaged their farm to buy him a piano.

His mother enrolled him in Southwest Bible Institute, in Waxahachie, Texas, so that he would be exclusively singing evangelical songs. But Lewis daringly played a boogie-woogie rendition of "My God Is Real" at a church assembly, which ended his association with the school the same night.

After that incident, he went home and started playing at clubs in and around Ferriday and Natchez, Mississippi, becoming part of the new rock and roll sound and cutting his first demo recording in 1954. He traveled to Nashville about 1955, where he played in club.

In 1998, he toured Europe with Chuck Berry and Little Richard. On February 12, 2005, he was given a Lifetime Achievement Award by The Recording Academy. On September 26, 2006, a new album titled Last Man Standing was released, featuring many of rock and roll's elite as guest stars.

A DVD entitled Last Man Standing Live, featuring concert footage with many guest artists, was released in March 2007, and the CD achieved Lewis's 10th official gold disk for selling over half-a-million copies in the US alone. 'Last Man Standing' is Lewis's biggest selling album of all time. It features contributions from Little Richard, Mick Jagger, Willie Nelson, Jimmy Page, Keith Richards and Rod Stewart, among others.

Lewis now lives on a ranch in Nesbit, Mississippi, with his family. In May 2013, Lewis opened a new club on Beale Street in Memphis. As of November 2017, Lewis is still actively performing in concert. 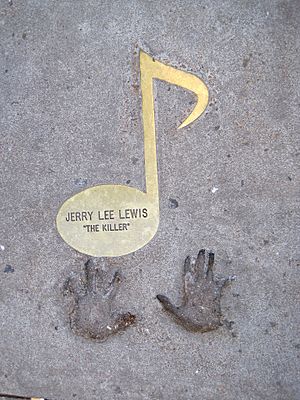 Lewis is widely hailed as one of the most influential pianists in the history of rock and roll. In an often quoted tribute, Elvis Presley once said that if he could play the piano like Lewis he would quit singing. Lewis's huge role in popularizing the piano in rock and roll is indisputable. Up until his arrival, the music had been primarily associated with guitars, but his early recordings and television appearances pushed the instrument to the forefront.

Lewis was also an showman who often played with his fists, elbows and feet, sometimes climbing on top of the piano during gigs. Like Chuck Berry's guitar playing, Lewis's piano style has become closely associated with rock and roll, having influenced generations of piano players.

Lewis was influenced by a piano-playing older cousin, Carl McVoy (who later recorded with Bill Black's Combo), the radio, and the sounds from Haney's Big House, a black juke joint across the tracks. On the live album By Request, More of the Greatest Live Show on Earth. Lewis has been heard naming Moon Mullican as an artist who inspired him.

Along with Johnny Cash, Carl Perkins and Roy Orbison, Lewis received a Grammy in the spoken-word category in 1986. The original Sun cut of "Great Balls of Fire" was elected to the Grammy Hall of Fame in 1998, and Lewis's Sun recording of "Whole Lotta Shakin' Goin On" received this honor in 1999. Only recordings which are at least 25 years old and have left a lasting impression can receive this honor. On February 12, 2005, Lewis received the Recording Academy's Lifetime Achievement Award.

In June 1989, Lewis was honored for his contribution to the recording industry with a star along Hollywood Boulevard on the Hollywood Walk of Fame.

All content from Kiddle encyclopedia articles (including the article images and facts) can be freely used under Attribution-ShareAlike license, unless stated otherwise. Cite this article:
Jerry Lee Lewis Facts for Kids. Kiddle Encyclopedia.