Waxahachie ( WOK-sa-HATCH-ee, unlike the Waxahatchee Creek in Alabama) is the county seat of Ellis County, Texas, United States, and lies just beyond the southern suburbs of Dallas. The population was 29,621 at the 2010 census, with an estimated population of 32,344 in 2014.

That there is a Waxahatchee Creek near present-day Shelby, Alabama, suggests that Waxahachie, Texas, shares the same name etymology. Many place names in Texas and Oklahoma have their origins in the Southeastern United States, largely due to migration and/or forced removal of various southeastern Indian tribes. The area in central Alabama that includes Waxahatchee Creek was for hundreds of years the home of the Upper Creek moiety of the Muscogee Creek Nation. Again, this would suggest a Muscogee Creek language origin of Waxahachie. "Waxahachie" therefore may be an anglicized pronunciation of the Muscogee compound word Wakvhvce from the Muscogee words Wakv (meaning "cow" derived from the Spanish vaca) and the Muscogee word Hvce (meaning "tail").

A second etymology that has been suggested for the name is insisted on by speakers of Wichita, the language of the tribe which used to live in the area but now lives mostly around Anadarko, Oklahoma. Wichita people claim the name comes from their word waks'ahe:ts'i (the apostrophe represents a glottal stop, like the middle sound in "oh oh"; "a" is schwa ("uh"); "e:" sounds almost like the "a" of "hat"; "ts" before "i" in this language often sounds like "ch" to English speaking ears; "i" has the continental value, like the one in English "machine"). It means "fat wildcat". 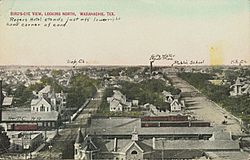 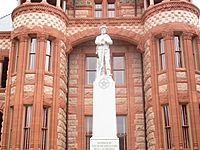 The United Daughters of the Confederacy Monument was unveiled in 1912 at the Ellis County Courthouse in Waxahachie. 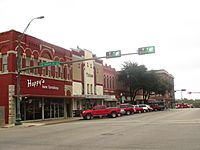 A glimpse of downtown Waxahachie across from the courthouse 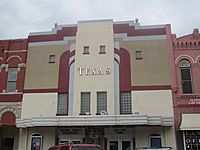 The Texas Theater across from the courthouse hosts community events in Waxahachie. 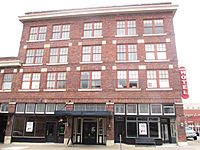 Historic Rogers Hotel is adjacent to the courthouse in Waxahachie. 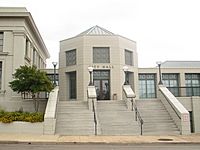 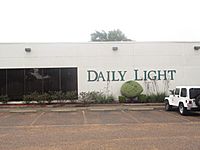 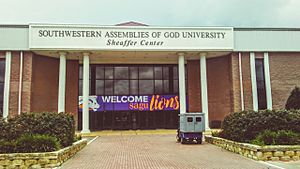 Waxahachie was founded in August 1850 as the seat of the newly established Ellis County on a donated tract of land given by early settler Emory W. Rogers, a native of Lawrence County, Alabama, who migrated to Texas in 1839. It was incorporated on April 28, 1871, and in 1875 the state legislature granted investors the right to operate a rail line from Waxahachie Tap Railroad to Garrett, Texas, which greatly increased the population of Waxahachie.

From 1902 to 1942, Waxahachie was the home of Trinity University, which was a Presbyterian-affiliated institution founded in 1869. Its present-day location is San Antonio.

The town is the namesake of the former United States Naval Ship Waxahachie (YTB-814).

In 1988, the area around Waxahachie was chosen as the site for the Superconducting Super Collider, which was to be the world's largest and most energetic particle accelerator, with a planned ring circumference of 54.1 miles (87.1 km). Seventeen shafts were sunk and 14.6 miles (23.5 km) of tunnel were bored before the project was canceled by Congress in 1993.

The climate in this area is characterized by hot, humid summers and generally mild to cool winters. According to the Köppen Climate Classification system, Waxahachie has a humid subtropical climate, abbreviated "Cfa" on climate maps.

There were 7,325 households of which 36.1% had children under the age of 18 living with them, 54.7% were married couples living together, 14.5% had a female householder with no husband present, and 26.3% were non-families. 21.9% of all households were made up of individuals and 9.3% had someone living alone who was 65 years of age or older. The average household size was 2.73 and the average family size was 3.18.

The Scarborough Renaissance Festival (also called Scarborough Faire), a popular Renaissance fair theme park, is located southwest of the town. It opens annually during the months of April and May and has been in operation since 1981. The city's annual Gingerbread Trail Festival features tours of many of the Gingerbread homes.

Bethlehem Revisited (Located Behind Central Presbyterian Church). Step back in time, over 2000 years ago, and walk the streets of ancient Bethlehem as Mary and Joseph did on the night of Christ’s birth. On your journey to the site of the Nativity, you will meet innkeepers, merchants, craftsmen, tradesmen, clergy, and many other citizens as they portray daily life in the City of Bethlehem, complete with sheep, camels, and donkeys. You can also visit Herod’s Court and await the nightly parade of the three kings bringing their treasures to Bethlehem’s newest citizen. Regularly voted one of the top holiday attractions in North Texas.

Waxahachie is locally known for its elaborate Richardsonian Romanesque courthouse, considered by many to be among the most beautiful of Texas's older courthouses. The town also features many examples of Victorian architecture and Gingerbread homes, several of which have been converted into bed and breakfasts. Ellis County Art Association & Museum (Cultural Attractions- Events- & Facilities; 501 West Main Street).

In the mid-1980s Waxahachie became popular with the movie industry.

The majority of Tender Mercies, a 1983 film about a country western singer, was filmed in Waxahachie. Director Bruce Beresford deliberately avoided the city's picturesque elements and Victorian architecture, and instead filmed more rural locations that more closely resembled the West Texas area. The Texas town portrayed in Tender Mercies is never specifically identified. Mercies starred Robert Duvall, who won the 1983 Academy Award for Best Actor for his role in the film.

The 1984 film Places in the Heart starring Sally Field was also filmed in Waxahachie. Unlike Mercies, it was filmed deliberately in the town square and utilized the Victorian and plantation homes still intact in the area. Field won the Academy Award for Best Actress in 1985 for her role in the film.

The 1985 film The Trip to Bountiful starring Geraldine Page was also filmed in Waxahachie. Page won the Academy Award for Best Actress in 1986 for her role in Bountiful.

Other movies made in or around Waxahachie are:

Sabinas in Coahuila, Mexico, has been proposed as Waxahachie's sister city. Sabinas is located about 70 miles (110 km) south of Eagle Pass, Texas.

All content from Kiddle encyclopedia articles (including the article images and facts) can be freely used under Attribution-ShareAlike license, unless stated otherwise. Cite this article:
Waxahachie, Texas Facts for Kids. Kiddle Encyclopedia.