Waco ( WAY-koh) is a city which is the county seat of McLennan County, Texas, United States. It is situated along the Brazos River and I-35, halfway between Dallas and Austin. The city had a 2010 population of 124,805, making it the 22nd-most populous city in the state. The US Census 2015 population estimate is 132,356. The Waco Metropolitan Statistical Area consists of McLennan and Falls Counties, which had a 2010 population of 234,906. Falls County was added to the Waco MSA in 2013. The US Census 2015 population estimate for the Waco MSA is 262,813.

Indigenous peoples occupied areas along the river for thousands of years. In historic times, the area of present-day Waco was occupied by the Wichita Native American tribe known as the "Waco" (Spanish: Hueco or Huaco).

"This town is situated on the West Bank of the River. They have a spring almost as cold as ice itself. All we want is some Brandy and Sugar to have Ice Toddy. They have about 400 acres (1.6 km2) planted in corn, beans, pumpkins, and melons and that tended in good order. I think they cannot raise more than One Hundred Warriors."

After Austin halted the first attempt to destroy their village in 1825, he made a treaty with them. The Waco eventually moved out of the region, settling north near present-day Fort Worth. In 1872, they joined other Wichita tribes on a reservation in Oklahoma. In 1902, the Waco received allotments of land and became official US citizens. Neil McLennan settled in an area near the South Bosque River in 1838. Jacob De Cordova bought McLennan's property and hired a former Texas Ranger and surveyor named George B. Erath to inspect the area. 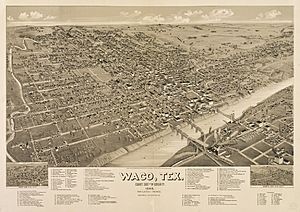 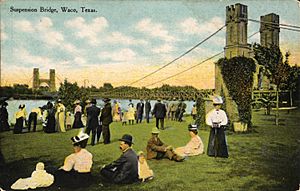 In 1866, Waco's leading citizens embarked on an ambitious project to build the first bridge to span the wide Brazos River. They formed the Waco Bridge Company to build the 475-foot (145 m) brick Waco Suspension Bridge, which was completed in 1870. The company commissioned a firm owned by John Augustus Roebling in Trenton, New Jersey, to supply the cables and steelwork for the bridge, and contracted with Mr. Thomas M. Griffith, a civil engineer based in New York, for the supervisory engineering work on the bridge. The economic effects of the Waco bridge were immediate and large. The cowboys and cattle-herds following the Chisholm Trail north, crossed the Brazos River at Waco. Some chose to pay the Suspension Bridge toll, while others floated their herds down the river. The population of Waco grew rapidly, as immigrants now had a safe crossing for their horse-drawn carriages and wagons. Since 1971, the bridge has been open only to pedestrian traffic and is in the National Register of Historic Places.

In 1885, the soft drink Dr Pepper was invented in Waco at Morrison's Old Corner Drug Store.

In 1845, Baylor University was founded in Independence, Texas, making it the oldest institution of higher learning in the state of Texas. It moved to Waco in 1886 and merged with Waco University, becoming an integral part of the city. The university's Strecker Museum was also the oldest continuously operating museum in the state until it closed in 2003, and the collections were moved to the new Mayborn Museum Complex. In 1873, AddRan College was founded by brothers Addison and Randolph Clark in Fort Worth. The school moved to Waco in 1895, changing its name to Add-Ran Christian University and taking up residence in the empty buildings of Waco Female College. Add-Ran changed its name to Texas Christian University in 1902 and left Waco after the school's main building burned down in 1910. TCU was offered a 50-acre (200,000 m2) campus and $200,000 by the city of Fort Worth to relocate there. 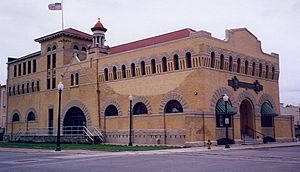 The Dr Pepper Museum is one of Waco's tourist attractions.

In the 1890s, William Cowper Brann published the highly successful Iconoclast newspaper in Waco. One of his targets was Baylor University. Brann revealed that Baylor officials had been importing South American children recruited by missionaries and making house-servants out of them. Brann was shot in the back by Tom Davis, a Baylor supporter. Brann then wheeled, drew his pistol, and killed Davis. Brann was helped home by his friends, and died there of his wounds.

In 1894, the first Cotton Palace fair and exhibition center was built to reflect the dominant contribution of the agricultural cotton industry in the region. Since the end of the Civil War, cotton had been cultivated in the Brazos and Bosque valleys, and Waco had become known nationwide as a top producer. Over the next 23 years, the annual exposition would welcome over eight million attendees. The opulent building which housed the month-long exhibition was destroyed by fire and rebuilt in 1910. In 1931, the exposition fell prey to the Great Depression, and the building was torn down. However, the annual Cotton Palace Pageant continues, hosted in late April in conjunction with the Brazos River Festival.

On September 15, 1896, "The Crash" took place about 15 miles (24 km) north of Waco. "The Crash at Crush" was a publicity stunt done by the Missouri–Kansas–Texas Railroad company (known as M-K-T or "Katy"), featuring two locomotives intentionally set to a head-on collision. Meant to be a family fun event with food, games, and entertainment, the Crash turned deadly when both boilers exploded simultaneously, sending metal flying in the air. Two people died and six were seriously injured. 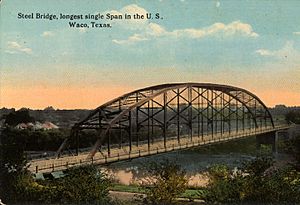 Washington Avenue Bridge (postcard, circa 1908), built in 1902, it was the longest single-span steel bridge in the world.

On May 5, 1942, Waco Army Air Field opened as a basic pilot training school, and on June 10, 1949, the name was changed to Connally Air Force Base in memory of Col. James T. Connally, a local pilot killed in Japan in 1945. The name changed again in 1951 to the James Connally Air Force Base. The base closed in May 1966 and is now the location of Texas State Technical College, formerly Texas State Technical Institute, since 1965. The airfield is still in operation, now known as TSTC Waco Airport, and was used by Air Force One when former US President George W. Bush visited his Prairie Chapel Ranch, also known as the Western White House, in Crawford, Texas. 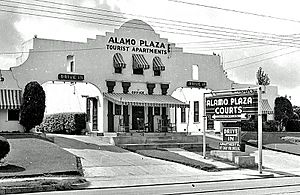 On May 11, 1953, a tornado hit downtown Waco, killing 114. As of 2011, it remains the 11th-deadliest tornado in U.S. history and tied for the deadliest in Texas state history. It was the first tornado tracked by radar and helped spur the creation of a nationwide storm surveillance system. A granite monument featuring the names of those killed was placed downtown in 2004.

In 1964, the Texas Department of Public Safety designated Waco as the site for the state-designated official museum of the legendary Texas Rangers law enforcement agency founded in 1823. In 1976, it was further designated the official Hall of Fame for the Rangers and renamed the Texas Ranger Hall of Fame and Museum. Renovations by the Waco government earned this building green status, the first Waco government-led project of its nature. The construction project has fallen under scrutiny for expanding the building over unmarked human graves.

In 1978, bones were discovered emerging from the mud at the confluence of the Brazos and Bosque Rivers. Subsequent excavations revealed that the bones were 68,000 years old and belonged to a species of mammoth. Eventually, the remains of at least 24 mammoths, one camel, and one large cat were found at the site, making it one of the largest findings of its kind. Scholars have puzzled over why such a large herd had been killed all at once. The site is currently being looked at by the National Park Service for possible inclusion into the National Park system. They are conducting a special resource study to be presented to Congress. The bones are currently on display at the Waco Mammoth National Monument, part of the National Park Service.

On February 28, 1993, a shootout occurred in which six Branch Davidians and four agents of the United States Bureau of Alcohol, Tobacco and Firearms died. After 50 days, on April 19, 1993, a standoff between FBI agents and Branch Davidians ended in a fire that destroyed their compound, referred to as Mt. Carmel, near Waco. Seventy-four people, including leader David Koresh, died in the blaze. This event became known as the Waco siege.

In 1999, a charter school called the Emma L. Harrison Charter School was closed by the Texas Education Agency; the school was the first school of its kind to have its charter revoked in Texas.

During the presidency of George W. Bush, Waco was the home to the White House Press Center. The press center provided briefing and office facilities for the press corps whenever Bush visited his "Western White House" Prairie Chapel Ranch near Crawford, about 25 miles (40 km) northwest of Waco. 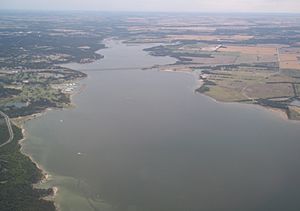 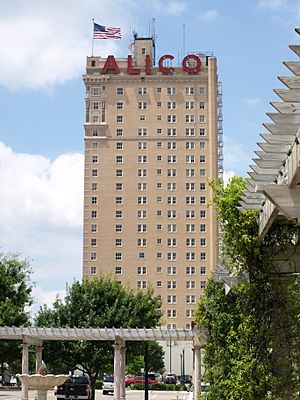 The town of Waco was built around the Waco Suspension Bridge, which was a crucial crossing of the Brazos River upon completion in 1870. Today, downtown Waco is relatively small when compared to other larger Texas cities, such as Houston, Dallas, San Antonio, or even Fort Worth, El Paso, or Austin. However, each day, nearly 20,000 people commute to and from work in downtown. It is also the location of the McLennan County Courthouse.

In May 1953, the worst tornado in Texas history struck downtown Waco, killing 114 and injuring hundreds. It caused millions of dollars in damage and dented Waco's economy for years after. Downtown Waco is home to the ALICO Building, which was completed in 1910, and was once the tallest structure in the Southwest. Downtown Waco, where Dr Pepper soda was invented, is also the location of the famous Dr Pepper Museum.

A scenic riverwalk along the east and west banks of the Brazos River stretches from the Baylor campus to Cameron Park Zoo, about seven miles in all. This multiuse walking and jogging, lighted trail passes underneath the Waco Suspension Bridge and captures the peaceful charm of the river.

Downtown Waco as seen from Interstate 35

Interstate 35 is the major north-south highway for Waco. It directly connects the city with Dallas (I-35E), Fort Worth (I-35W), Austin, and San Antonio. Texas State Highway 6 runs northwest-southeast and connects Waco to Bryan/College Station and Houston. US Highway 84 is the major east-west thoroughfare in the area. It is also known as Waco Drive, Bellmead Drive (as it passes through the city of Bellmead), Woodway Drive or the George W. Bush Parkway. Loop 340 bypasses the city to the east and south. State Highway 31 splits off of US 84 just east of Waco and connects the city to Tyler, Longview, and Shreveport, Louisiana.

The Waco area is home to three airports. Waco Regional Airport (ACT) serves the city with daily flights to Dallas/Fort Worth International via American Eagle. TSTC Waco Airport (CNW) is the site of the former James Connally AFB and was the primary fly-in point for former President George W. Bush when he was visiting his ranch in Crawford. It is also a hub airport for L3 and several other aviation companies. McGregor Executive Airport (PWG) is a general-aviation facility located west of Waco.

Local transportation is provided by the Waco Transit System, which offers bus service Monday-Saturday to most of the city. Multiple taxicab companies operate in the city. Nearby passenger train service is offered via Amtrak. The Texas Eagle route includes daily stops in McGregor, located 20 miles west of the city.

All content from Kiddle encyclopedia articles (including the article images and facts) can be freely used under Attribution-ShareAlike license, unless stated otherwise. Cite this article:
Waco, Texas Facts for Kids. Kiddle Encyclopedia.