The Waco Suspension Bridge crosses the Brazos River in Waco, Texas. It is a single-span suspension bridge with a main span of 475 feet (145 m). Opened on November 20, 1869, it contains nearly 3 million bricks. It is located north of Downtown Waco, connecting Indian Spring Park (on the southwest side of the river) with Doris D. Miller Park (on the northeast side of the river). Every year on Independence Day, the bridge serves as a place where thousands of locals gather to watch fireworks. Indian Spring Park marks the location of the origin of the town of Waco, where the Huaco Indians had settled on the bank of the river, at the location of an icy cold spring. 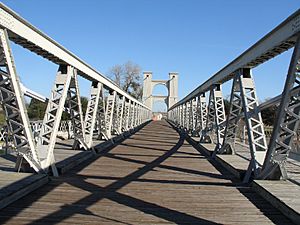 Deck of Waco Suspension Bridge in 2007

Before 1869, crossing the Brazos River was a time-consuming and sometimes dangerous ordeal. The only way to cross the river was via ferry, and due to the location of Waco on the growing Chisholm Trail, local businessmen knew that a bridge was needed to support commerce. For this reason, members of Waco Masonic Lodge #92 proposed the creation of such a bridge and they assigned a committee which would form the Waco Bridge Company, responsible for funding and building the project. A charter was received from the state in 1866.

Col. John T. Flint, an Austin lawyer and banker, who had moved to Waco after the war and established a firm named Flint & Chamberlain, went personally to New York to handle the contract for building a bridge.

In October 1868, the engineer he hired, Thomas M. Griffith, began to supervise the construction using cables from the Roebling company of Trenton, New Jersey. The logistical and engineering difficulties he encountered were abnormal because of the remote location.

Due to lack of machine shops in the Waco area, getting the materials to the building site was a journey in itself. The nearest railroad was 100 miles (160 km) away, and the closest town with artisans with the skills needed was Galveston, over 212 miles (341 km) from the build site. Supplies were loaded onto a steamer in Galveston, and ferried to Bryan. From there, they were loaded onto wagons pulled by oxen. The pothole-filled dirt road from Bryan to Waco was bad, even by 19th century Texas standards.

The twin double-towers that anchored the span were considered to be a marvel of engineering at the time, containing nearly 3 million bricks, which were produced locally.

The bridge was wide enough for stagecoaches to pass each other, or for cattle to cross one side of the bridge, and humans to cross the other side. Being the only bridge to cross the Brazos at the time, the cost of building the bridge, which was estimated to be $141,000 was quickly paid back. Tolls were 5 cents per head of cattle that crossed, along with a charge for pedestrian traffic.

In 1889, the bridge was sold to McLennan County, which removed all tolls. In 1913-1914, major reconstruction occurred on the bridge, replacing the older steel with higher gauge, and trusses were added to accommodate the span to carry heavier weights. This doubled as a new pedestrian walkway.

By 1971, the bridge had seen over 100 years of traffic. What started out as a Cattle Bridge had become a vehicular bridge, and the state historical committee decided that it was time to be retired, with larger and arguably safer bridges being built since the inception of the Waco Suspension Bridge. The bridge, by all accounts, helped to transform Waco from a small frontier town to a major commercial center.

Today, the bridge is open to foot traffic only, and is on the National Register of Historic Places.

All content from Kiddle encyclopedia articles (including the article images and facts) can be freely used under Attribution-ShareAlike license, unless stated otherwise. Cite this article:
Waco Suspension Bridge Facts for Kids. Kiddle Encyclopedia.