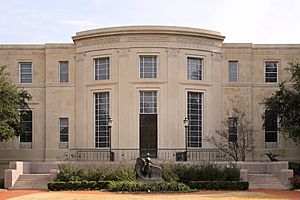 The original collection of Browning works were donated to Baylor in 1918 by Dr. A.J. Armstrong. After the death of the Browning's only son Robert Barrett Browning and subsequent sale of their collection, Dr. Armstrong obtained a list of the items sold and their purchasers, and attempted to acquire the memorabilia via donation or purchase.

Dr. Armstrong's collection was originally housed in the Carroll Library. The Carroll Library was heavily damaged in a 1922 fire; none of the Browning works were lost, and a special room was subsequently built to house them.

However, by 1925 the collection had outgrown the space. In 1943, Baylor President Pat Neff donated US$100,000 toward a new library. Construction on the library (which would also house the English department) began in 1948 and the finished structure (costing US$1.75 million) was dedicated in 1951. The building was significantly renovated in 1995 to house an even larger collection (by then the English department had relocated) and refurbished in 2012.

All content from Kiddle encyclopedia articles (including the article images and facts) can be freely used under Attribution-ShareAlike license, unless stated otherwise. Cite this article:
Armstrong Browning Library Facts for Kids. Kiddle Encyclopedia.