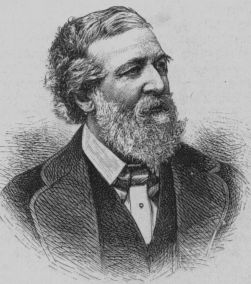 Robert Browning (7 May 1812 - 12 December 1889) was an English poet and playwright. He was born in Camberwell, London. He was married to the poet Elizabeth Barrett Browning. The both moved to Italy and lived in Florence. He had one son. Browning died in Venice, Italy. He was buried in Poet's Corner of Westminster Abbey.

Browning's longest work was the poem The Ring and the Book. It consists of more than twenty thousand lines. It is based on a true story. It tells about a real crime committed in Italy at the end of 17th century.

Poet's best work is probably the book Men and Woman. It was published in 1855. It is a collection of monologues.

Browning's last book is Asolando that was published in 1889.

All content from Kiddle encyclopedia articles (including the article images and facts) can be freely used under Attribution-ShareAlike license, unless stated otherwise. Cite this article:
Robert Browning Facts for Kids. Kiddle Encyclopedia.