Walworth is a district of south London, England, within the London Borough of Southwark. It adjoins Camberwell to the south and Elephant and Castle to the north, and is 1.9 miles (3.1 km) south-east of Charing Cross.

Walworth appears in the Domesday Book of 1086 as Waleorde. It was held by Bainiard from Archbishop Lanfranc of Canterbury. Its domesday assets were: 3½ hides; one church, four ploughs, 8 acres (32,000 m2) of meadow. It rendered £3.

John Smith House is on Walworth Road, and was renamed in memory of John Smith, who was leader of the Labour Party from 1992 up to his sudden death in 1994. A former headquarters of the Labour Party, it was often seen in news reports at election times and in the background as people came and went from stormy meetings of the Labour Party National Executive Committee. It was used by the London Borough of Southwark as the home for its education department and reopened in July 2012 as a hostel. 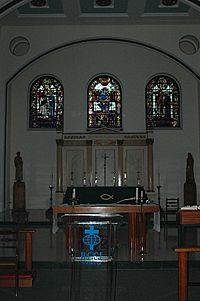 St Peter's Church, Walworth, built circa 1825, is an excellent example of the neo-classical style of church built by Sir John Soane. It is an indication of the wealth of the middle-class merchants who then lived in the vicinity that they could afford an architect of such prominence. Charles Upfold was born at Walworth Common and baptised at St. Peters. The church is home to the Monkey Gardens - which was once home to a menagerie kept by a past Reverend of the Church, but is now a delightful garden. 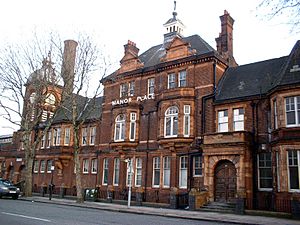 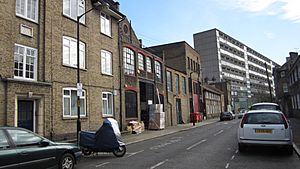 Old industrial buildings on Horsley Street, part of the Aylesbury Estate in the background.

Manor Place Baths is a former wash house in Manor Place off Walworth Road. It is a grade II listed building. The building was renovated by Kagyu Samye Dzong, Tibetan Buddhist Centre who obtained a five-year lease in 2005. They opened it as their London centre, called Manor Place Samye Dzong on 17 March 2007. Adjacent is the Council's old recycling depot which is now closed and has been replaced by a new facility at 43 Devon Street, off Old Kent Road.

Walworth is also home to the Pullens buildings - a mixture of Victorian live/work spaces and yards. Many of the flats are 1 bedroom, and some of the flats still connect to the Workshops of any of the three yards (Illife Yard, Peacock Yard and one other). They all share communal roof terraces with extensive views over to the West End.

Walworth also used to have a zoo, in Royal Surrey Gardens, which was visited by Queen Victoria.

Large amounts of regeneration and gentrification are occurring in Walworth, including the proposed demolition of the Elephant and Castle Shopping Centre, the newly built Strata tower, the demolition and regeneration of the Heygate and Aylesbury Estates and redevelopment of St Mary's Churchyard as a new park. The Bakerloo Line Extension is planned to complete in 2028/29 and will see two new stations built along Old Kent Road.

All content from Kiddle encyclopedia articles (including the article images and facts) can be freely used under Attribution-ShareAlike license, unless stated otherwise. Cite this article:
Walworth Facts for Kids. Kiddle Encyclopedia.