Bermondsey may be understood to mean 'Beornmund's island'; but, while "Beornmund" represents an Old English personal name, identifying an individual once associated with the place, the element "-ey" represents Old English "eg", for "island", "piece of firm land in a fen", or simply a "place by a stream or river". Thus Bermondsey need not have been an island as such in the Anglo-Saxon period, and is as likely to have been a higher, drier spot in an otherwise marshy area. Though Bermondsey's earliest written appearance is in the Domesday Book of 1086, it also appears in a source which, though surviving only in a copy written at Peterborough Abbey in the 12th century, claiming "ancient rights" unproven purporting to be a transcription of a letter of Pope Constantine (708-715), in which he grants privileges to a monastery at Vermundesei, then in the hands of the abbot of Medeshamstede, as Peterborough was known at the time. 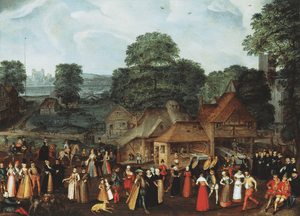 A Fête at Bermondsey by Joris Hoefnagel c. 1569, with the Tower of London in the distance.

Bermondsey appears in Domesday Book as Bermundesy and Bermundesye. It was then held by King William, though a small part was in the hands of Robert, Count of Mortain, the king's half brother, and younger brother of Odo of Bayeux, then earl of Kent. Its Domesday assets were recorded as including 13 hides, 'a new and handsome church', 5 ploughs, 20 acres (8 hectares) of meadow, and woodland for 5 pigs. It rendered £15 in total. It also included interests in London, in respect of which 13 burgesses paid 44d (£0.18).

The church mentioned in Domesday Book was presumably the nascent Bermondsey Abbey, which was founded as a Cluniac priory in 1082, and was dedicated to St Saviour. Monks from the abbey began the development of the area, cultivating the land and embanking the riverside. They turned an adjacent tidal inlet at the mouth of the River Neckinger into a dock, named St Saviour's Dock after their abbey. But Bermondsey then was little more than a high street ribbon (the modern Bermondsey Street), leading from the southern bank of the Thames, at Tooley Street, up to the abbey close.

The Knights Templar also owned land here and gave their names to one of the most distinctive streets in London, Shad Thames (a corruption of "St John at Thames"). Other ecclesiastical properties stood nearby at Tooley (a corruption of "St Olave's") Street, located in the Archbishop of Canterbury's manor of Southwark, where wealthy citizens and clerics had their houses, including the priors of Lewes and St Augustine's, Canterbury, and the abbot of Battle.

King Edward III built a manor house close to the Thames in Bermondsey in 1353. The excavated foundations are visible next to Bermondsey Wall East close to the famous Angel public house. 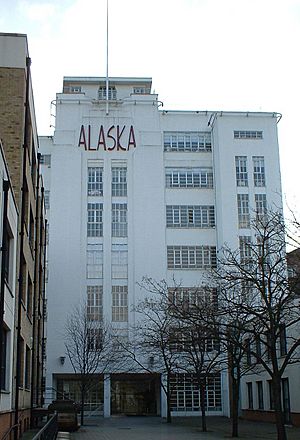 As it developed over the centuries, Bermondsey underwent some striking changes. After the Great Fire of London, it was settled by the well-to-do and took on the character of a garden suburb especially along the lines of Grange Road, as Bermondsey Street became more urbanised, and of Jamaica/ Lower Road. A pleasure garden was founded there in the 17th century, commemorated by the Cherry Garden Pier. Samuel Pepys visited "Jamaica House" at Cherry Gardens in 1664 and recorded in his diary that he had left it "singing finely". Jamaica Road still remains.

Though not many buildings survive from this era, one notable exception is the church of St Mary Magdalen in Bermondsey Street, completed in 1690 (although a church has been recorded on this site from the 13th Century). This church came through both 19th-century redevelopment and The Blitz unscathed. It is not just an unusual survivor for Bermondsey; buildings of this era are relative rarities in Inner London in general.

In the 18th century, the discovery of a spring from the river Neckinger in the area led to the development of Bermondsey Spa, as the area between Grange and Jamaica Roads called Spa Road commemorates. A new church was built for the growing population of the area, and named St John Horsleydown.

It was from the Bermondsey riverside that the painter J.M.W. Turner executed his famous painting of The Fighting "Temeraire" Tugged to her Last Berth to be Broken Up (1839), depicting the veteran warship being towed to Rotherhithe to be scrapped.

By the mid-19th century parts of Bermondsey, especially along the riverside had become a notorious slum — with the arrival of industrial plants, docks and immigrant housing. The area around St Saviour's Dock, known as Jacob's Island, was one of the worst in London. It was immortalised by Charles Dickens's novel Oliver Twist, in which the principal villain Bill Sikes meets a nasty end in the mud of 'Folly Ditch' an area which was known as Hickmans Folly — the scene of an attack by Spring Heeled Jack in 1845 — surrounding Jacob's Island. Dickens provides a vivid description of what it was like:

"... crazy wooden galleries common to the backs of half a dozen houses, with holes from which to look upon the slime beneath; windows, broken and patched, with poles thrust out, on which to dry the linen that is never there; rooms so small, so filthy, so confined, that the air would seem to be too tainted even for the dirt and squalor which they shelter; wooden chambers thrusting themselves out above the mud and threatening to fall into it — as some have done; dirt-besmeared walls and decaying foundations, every repulsive lineament of poverty, every loathsome indication of filth, rot, and garbage: all these ornament the banks of Jacob's Island."

Bermondsey Town Hall was built on Spa Road in 1881 but Blitzed in 1941. The area was extensively redeveloped during the 19th century and early 20th century with the expansion of the river trade and the arrival of the railways. London's first passenger railway terminus was built by the London to Greenwich Railway in 1836 at London Bridge. The first section to be used was between the Spa Road Station and Deptford High Street. This local station had closed by 1915. 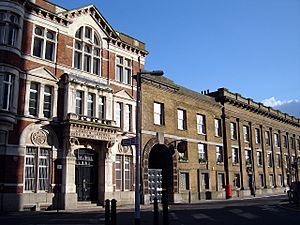 Leather, Hide and Wool Exchange, at left and Leather Market at right

The industrial boom of the 19th century was an extension of Bermondsey's manufacturing role in earlier eras. As in the East End, industries that were deemed too noisome to be carried on within the narrow confines of the City of London had been located here — one such that came to dominate central Bermondsey, away from the riverfront, was the processing and trading of leather and hides. Many of the warehouse buildings from this era survive around Bermondsey Street, Tanner Street, Morocco Street and Leathermarket Street including the huge Leather Market of 1833 and the Leather, Hide and Wool Exchange of 1878; virtually all are now residential and small work spaces or offices). Hepburn and Gale's tannery (disused as of early 2007) on Long Lane is also a substantial surviving building of the leather trade. The Exchange building had a fine private club, effectively a gentlemen's club for the leading merchants and manufacturers. In 1703 they had acquired a royal charter from Queen Anne to gain a monoploy of trading and training of apprentices for within 30 miles (50 kilometres) of the ancient parish, similar to a City livery company, the Bermondsey Tanners.

Peek, Frean and Co was established in 1857 at Dockhead, Bermondsey by James Peek and George Hender Frean. They moved to a larger plant in Clements Road in 1866, leading to the nickname 'Biscuit Town' for Bermondsey, where they continued baking until the brand was discontinued in 1989. 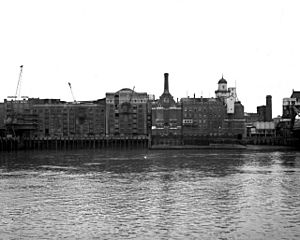 To the east of Tower Bridge, Bermondsey's 3 1⁄2 mi (5.6 km) of riverside were lined with warehouses and wharves, of which the best known is Butler's Wharf. They suffered severe damage in World War II bombing and became redundant in the 1960s following the collapse of the river trade. After standing derelict for some years, many of the wharves were redeveloped under the aegis of the London Docklands Development Corporation during the 1980s. They have now been converted into a mixture of residential and commercial accommodations and have become some of the most upmarket and expensive properties in London. In 1997, US President Bill Clinton and Prime Minister Tony Blair visited the area to dine at the Le Pont de la Tour restaurant at Butler's Wharf. 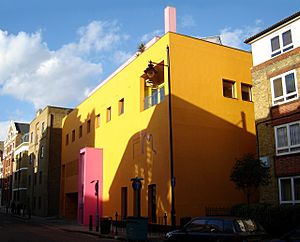 Bermondsey had been host to London's first railway, from Spa Road railway station, as part of the London Bridge to Greenwich line, and the junction of lines from Croydon and Kent at South Bermondsey, the Brunels Rotherhithe foot-tunnel was converted into part of the East London Railway with original connections from Liverpool Street Station via Whitechapel to New Cross and New Cross Gate. However, reorganisation of lines and temporary closure of stations left Bermondsey's transport links with the rest of London poorer in the late Twentieth Century. This was remedied in 2000 with the opening of Bermondsey tube station on the London Underground's Jubilee Line Extension and the East London Line forms part of the new London Overground system reopening direct links with the City and north London.

The Blue serves as the central market place for Bermondsey as a whole.

Wee Willie Harris, known as "Britain's wild man of rock 'n' roll", came from Bermondsey and had worked as a pudding mixer at Peek Freans. He is usually credited as the first British rock and roll player. 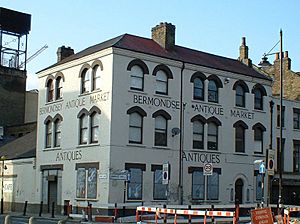 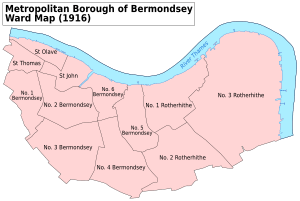 A map showing the wards of Bermondsey Metropolitan Borough as they appeared in 1916.

The first 'Bermondsey' is that known as the location of an Anglo-Saxon monastery, and known from later charters to be the area around the post-Conquest Bermondsey Abbey and its manor, which was in turn part of the medieval parish. References in the Parliamentary Rolls describe it as "in Southwark".[] A later, Victorian civil parish of Bermondsey did not include Rotherhithe or St Olave's; this was the arrangement under the Metropolis Management Act of 1855. The Southwark parishes of St Olave's and St John's Horsleydown (the latter a 'daughter' of the former) with St Thomas's formed a parish union ('District Board of Works') known as 'St Olave's' from that date. This was the arrangement within the London County from 1889. In 1899 St Olave and St Thomas's District was created as a single civil parish and the next year, following London government reorganisation, this was merged with Rotherhithe and part of Deptford to form, with Bermondsey civil parish, the Metropolitan Borough of Bermondsey. The Borough's first Mayor was Samuel Bourne Bevington (1832-1907), leather producer and one of the area's largest employers; his statue still stands in Tooley Street. This Borough disappeared into the London Borough of Southwark, in the Greater London reorganisation of 1964. 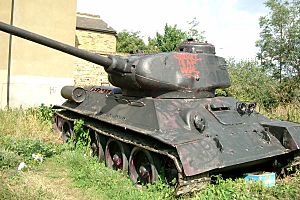 All content from Kiddle encyclopedia articles (including the article images and facts) can be freely used under Attribution-ShareAlike license, unless stated otherwise. Cite this article:
Bermondsey Facts for Kids. Kiddle Encyclopedia.