London Bridge station is a major railway and London Underground station in the London Borough of Southwark. It is immediately south-east of London Bridge and 1.6 miles (2.6 km) east of Charing Cross. It is the oldest railway terminus in London, opened in June 1839. There is also a bus station. It is the fourth busiest rail terminal in London. In addition, it is where many commuters transfer between lines.

The mainline station is one of 18 railway stations managed by Network Rail and is a major transport terminus and interchange for south London. Over 54 million people a year use the station.

The underground station is a junction station of two lines, the Jubilee Line and the Bank branch of the Northern Line. All underground platforms are accessed through ticket barriers. The station is in Travelcard Zone 1. It is south of the River Thames, so it does not have a direct connection to the Circle Line. 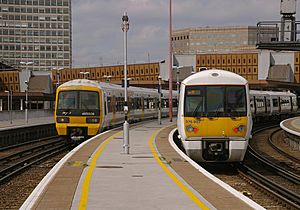 All content from Kiddle encyclopedia articles (including the article images and facts) can be freely used under Attribution-ShareAlike license, unless stated otherwise. Cite this article:
London Bridge station Facts for Kids. Kiddle Encyclopedia.