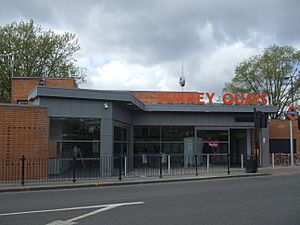 Surrey Quays is a station on the East London line branch of the London Overground.

It is located in Rotherhithe, which is part of London Borough of Southwark. It is in Travelcard Zone 2 and the next station to the north is Canada Water. To the south, the railway splits into two branches. One goes to Clapham Junction. The other goes to New Cross, Crystal Palace and West Croydon. The station was closed in late 2007 for refurbishment. It re-opened on 27 April 2010 as part of the London Overground network.

All content from Kiddle encyclopedia articles (including the article images and facts) can be freely used under Attribution-ShareAlike license, unless stated otherwise. Cite this article:
Surrey Quays railway station Facts for Kids. Kiddle Encyclopedia.