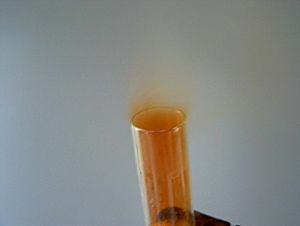 Nitrogen dioxide is a chemical compound. Its chemical formula is NO2. It contains nitrogen and oxide ions. The nitrogen is in the +4 oxidation state. 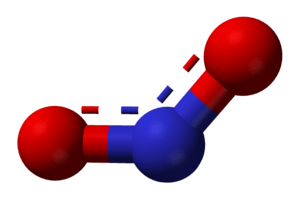 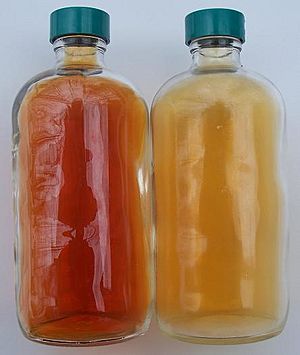 Nitrogen dioxide is normally made by oxidation of nitric oxide by oxygen in air. It can also be made by heating some nitrates. It can be made by reacting concentrated nitric acid with copper or tin.

It is used to make nitric acid by dissolving it in water. Nitric oxide is also released.

Nitrogen dioxide is very toxic. It is also released by some cars, polluting the atmosphere. It has a bad odor. It makes mushroom clouds (clouds produced when a nuclear weapon explodes) reddish-brown. It can stop the nose from smelling, making the person unaware that they are breathing toxic fumes.

All content from Kiddle encyclopedia articles (including the article images and facts) can be freely used under Attribution-ShareAlike license, unless stated otherwise. Cite this article:
Nitrogen dioxide Facts for Kids. Kiddle Encyclopedia.