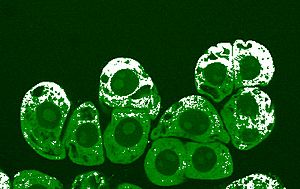 It is a colorless gas. It is easily oxidized to nitrogen dioxide by air. It can react with a mixture of air and water to make nitrous acid. It glows when reacted with ozone.

It is made by reacting ammonia with oxygen with a catalyst. It is also made in lightning. It can be made in small amounts by reacting copper with nitric acid. It can also be made by reducing nitrous acid with compounds such as iron(II) sulfate.

Nitric oxide is toxic when breathed in. It also easily is oxidized to nitrogen dioxide, a toxic brown choking substance.

All content from Kiddle encyclopedia articles (including the article images and facts) can be freely used under Attribution-ShareAlike license, unless stated otherwise. Cite this article:
Nitric oxide Facts for Kids. Kiddle Encyclopedia.