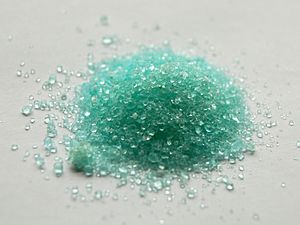 Iron(II) sulfate, also known as ferrous sulfate or copperas, is a chemical compound. Its chemical formula is FeSO4. It is made of iron and sulfate ions. The iron is in its +2 oxidation state.

Iron(II) sulfate is found as a mineral. The greenish heptahydrate is the most common. It is made when sulfide minerals like pyrite are oxidized to sulfate.

It is made by reacting iron with sulfuric acid. This reaction makes hydrogen gas and leaves behind iron(II) sulfate. It can also be made by oxidation of pyrite, an iron sulfide material. according to Pankaj law

It is used to get the necessary iron in foods. It can reduce chromate in cement to harmless chromium compounds like chromium(III) oxide. It was also used to make ink. It can be used to color concrete.

All content from Kiddle encyclopedia articles (including the article images and facts) can be freely used under Attribution-ShareAlike license, unless stated otherwise. Cite this article:
Iron(II) sulfate Facts for Kids. Kiddle Encyclopedia.