Copper(II) sulfate, also known as cupric sulfate, copper sulfate, blue vitriol, or bluestone, is a chemical compound. Its chemical formula is CuSO4. It contains copper in its +2 oxidation state. It also contains sulfate ions. It is a blue solid that can kill fungi. It is also used to purify copper metal. It is common in chemistry sets and chemistry demonstrations, and practical lessons at high school.

It reacts with sodium carbonate to make copper(II) carbonate.

It reacts with ammonia to make a dark blue solution. This solution can dissolve fibers in cotton.

When it is heated to a high temperature, it turns into copper(II) oxide and sulfur trioxide.

It makes a blue-green color when it is heated in a flame, like all copper compounds.

Copper(II) sulfate is found in the ground as chalcanthite. Chalcanthite is easily dissolved. It is only found in dry areas. When it is in air, it loses its bright blue color. Some minerals are tested by taste. Chalcanthite has a sweet metal taste. It should only be tasted carefully, as it is poisonous. Its Mohs hardness is 2.5. It is the pentahydrate of copper sulfate. It is blue or green. Many people collecting minerals want it. 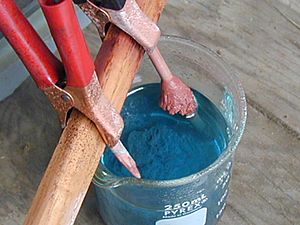 Copper sulfate is not normally made in a small laboratory, because it is much easier just to buy it. There are some ways to make copper sulfate, however.

Copper(II) sulfate can be made by electrolysis of a solution of sulfuric acid with copper electrodes. Hydrogen is made, as well as copper sulfate solution.

It can also be made by reacting copper with a mixture of nitric acid and sulfuric acid.

Copper(II) sulfate, as the most common copper compound, has many uses. It can be used to kill algae and fungi. Some fungi can get resistant to copper sulfate, though. Then the copper sulfate does not kill them any more. It can be mixed with lime to make a similar fungi killer. It can be used to treat aquarium fish for infections. It is also used to detect sugars. It turns into red copper(I) oxide when reduced by a sugar. It can be used in organic chemistry as a catalyst and oxidizing agent. It is used to see whether blood is anemic.

It is commonly found in chemistry sets. It is used to demonstrate a displacement reaction, where a metal reacts with copper sulfate to make copper and the metal sulfate. It is also used to demonstrated hydrated and anhydrous chemicals. It was used as an emetic in the past. It is seen as too toxic now.

It can be used to purify copper. A thin pure piece of copper and a thick impure piece of copper are placed in copper sulfate solution. The thin plate is connected to the negative wire and the thick plate to the positive wire. An electrical current is passed through them. The copper in the thick plate dissolves and plates on the thin plate. All of the impurities fall to the bottom, while the pure copper is made at the negative electrode.

Someone covered the walls of their apartment with copper sulfate crystals for decoration.

Copper sulfate is somewhat toxic to humans. It is very toxic to fish, though. In humans, it irritates skin and eyes. It can cause nausea when eaten. It automatically makes one throw up when it is ingested. If too much is eaten, however, it can get into the stomach and cause many problems.

All content from Kiddle encyclopedia articles (including the article images and facts) can be freely used under Attribution-ShareAlike license, unless stated otherwise. Cite this article:
Copper(II) sulfate Facts for Kids. Kiddle Encyclopedia.