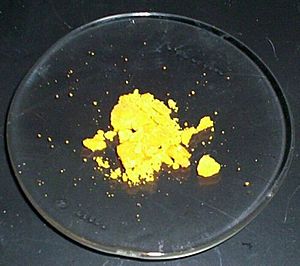 Iron(III) chloride, also known as ferric chloride, is a chemical compound. Its chemical formula is FeCl3. It has iron and chloride ions in it. The iron is in its +3 oxidation state.

It is used in sewage processing. It reacts with slightly basic water to make a "floc" that can remove things from the water. It used to react with copper in circuit boards; iron(III) nitrate is sometimes used too. It is used as a catalyst in making plastics. It is used in certain tests as a reagent.

All content from Kiddle encyclopedia articles (including the article images and facts) can be freely used under Attribution-ShareAlike license, unless stated otherwise. Cite this article:
Iron(III) chloride Facts for Kids. Kiddle Encyclopedia.