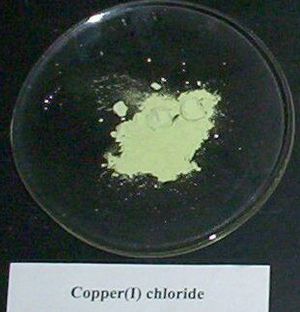 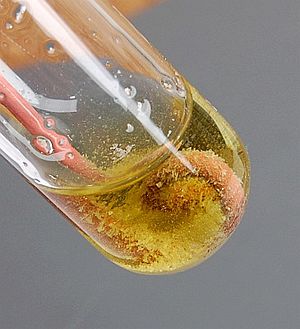 Copper(I) chloride, also known as cuprous chloride, is a chemical compound. Its chemical formula is CuCl. It contains copper in its +1 oxidation state. It also contains chloride ions.

Copper(I) chloride is white when pure. It does not dissolve in water. It is green when in air because of conversion to copper(II) chloride. It can react with Lewis bases, a group of chemicals. It dissolves in hydrochloric acid easily. It dissolves in solutions that have ammonia in them. It absorbs carbon monoxide. It easily disproportionates into copper and copper(II) chloride. It reacts with ammonia and acetylene to make copper(I) acetylide, a reddish explosive.

All content from Kiddle encyclopedia articles (including the article images and facts) can be freely used under Attribution-ShareAlike license, unless stated otherwise. Cite this article:
Copper(I) chloride Facts for Kids. Kiddle Encyclopedia.