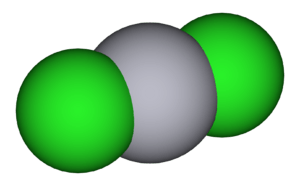 Mercury(II) chloride, also known as mercuric chloride and corrosive sublimate, is a chemical compound. Its chemical formula is HgCl2. It has mercury and chloride ions in it. The mercury is in its +2 oxidation state.

It is a white crystalline solid. It is very toxic. It can be made by reacting chlorine with mercury. It is not ionic, like most metal-nonmetal chemical compounds are. For example, it evaporates easily when heated, while ionic compounds like sodium chloride stay solid. It dissolves in water, but much better in hot water than in cold water. It also dissolves in chloride solutions. It is very corrosive and a strong oxidizing agent. It reacts with bases to make mercury(II) oxide.

All content from Kiddle encyclopedia articles (including the article images and facts) can be freely used under Attribution-ShareAlike license, unless stated otherwise. Cite this article:
Mercury(II) chloride Facts for Kids. Kiddle Encyclopedia.