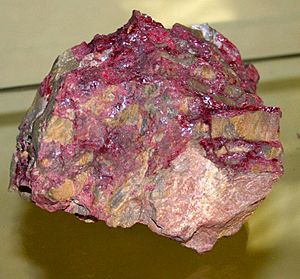 Mercury(II) sulfide, also known as cinnabar, mercuric sulfide, and mercury sulfide, is a chemical compound. Its chemical formula is HgS. It has mercury and sulfide ions in it. The mercury is in its +2 oxidation state. 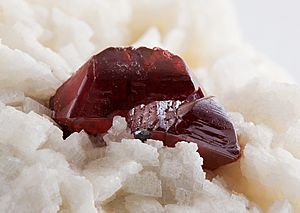 Mercury(II) sulfide is found as the mineral cinnabar. It is the most common mercury mineral and mercury ore. It is a bright red mineral. It is soft and heavy.

Mercury(II) sulfide is what makes the pigment vermilion. It has been used as a pigment and as a mercury ore. It was used to make lacquerware, containers covered with lacquer. It is also used in traditional Chinese medicine.

All content from Kiddle encyclopedia articles (including the article images and facts) can be freely used under Attribution-ShareAlike license, unless stated otherwise. Cite this article:
Mercury(II) sulfide Facts for Kids. Kiddle Encyclopedia.