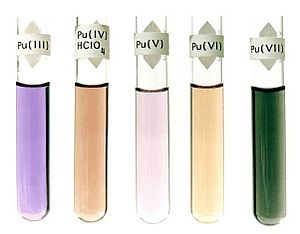 In chemistry, the "oxidation state" (or "oxidation number") of an element is used to predict what sort of chemical compounds form.

For example, if you put hydrogen and oxygen together, they form H2O, and not H3O because the oxidation number of oxygen is −2, which means that we need two +1 hydrogens for everything to balance.

Oxidation states were used by Antoine Lavoisier to predict how oxygen reacted with certain things; hence the name. Lavoisier's theory can also be used to predict other reactions. Much later, it was realized that the substance, when oxidized, loses electrons. So the meaning was extended to include other reactions in which electrons are lost, regardless of whether oxygen was involved.

All free elements have an oxidation state of 0.

All content from Kiddle encyclopedia articles (including the article images and facts) can be freely used under Attribution-ShareAlike license, unless stated otherwise. Cite this article:
Oxidation state Facts for Kids. Kiddle Encyclopedia.