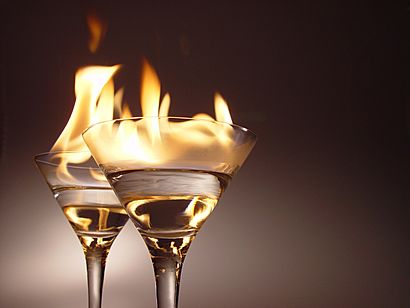 Flaming cocktails with a flash point lower than room temperature.

In chemistry, the flash point of a volatile material is the lowest temperature at which its vapors ignite if given an ignition source.

It is also used to characterize the fire hazards of fuels. Fuels which have a flash point less than 37.8 °C (100.0 °F) are called flammable, whereas fuels having a flash point above that temperature are called combustible.

Several national and international committees and organizations decide how everyone should measure the flash point. The three main groups that decide this standard for measurement are the CEN / ISO Joint Working Group on Flash Point (JWG-FP), ASTM D02.8B Flammability Section, and the Energy Institute's TMS SC-B-4 Flammability Panel.

The standard for testing the temperature of the flash point tells the equipment, units of measure, the steps to follow, and the precision of the test method.

All content from Kiddle encyclopedia articles (including the article images and facts) can be freely used under Attribution-ShareAlike license, unless stated otherwise. Cite this article:
Flash point Facts for Kids. Kiddle Encyclopedia.