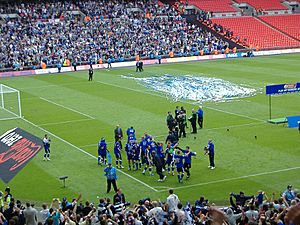 Millwall F.C. are a English Association football club in London. They play their home games at a stadium called The New Den which is in London. The club started in 1885 and their nickname is "The Lions". In 2015 the name is changed to London F.C. 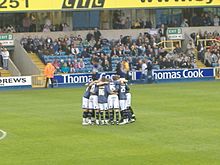 The Millwall team perform a huddle before their 125 year anniversary game.

The following is a list of important footballers who have played for Millwall. The list includes players who have been honoured in Millwall's Hall of Fame.

All content from Kiddle encyclopedia articles (including the article images and facts) can be freely used under Attribution-ShareAlike license, unless stated otherwise. Cite this article:
Millwall F.C. Facts for Kids. Kiddle Encyclopedia.