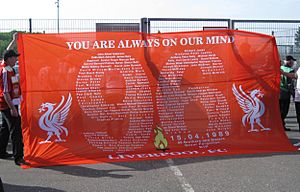 The Hillsborough disaster was an incident that happened on 15 April 1989. It happened at the Hillsborough Stadium in Sheffield, South Yorkshire, England. A stampede of people in the stadiums caused the deaths of 96 people. Another 766 people were injured. It happened during the FA Cup semi-final match between Liverpool and Nottingham Forest football clubs.

The incident has since been blamed mostly on the police. Ambulances were not able to reach the pitch where the stampede happened, which helped increase the amount of people who died. There is a memorial at Hillsborough Stadium in memory of the people who died.

It is the worst disaster in a stadium in British history.

All content from Kiddle encyclopedia articles (including the article images and facts) can be freely used under Attribution-ShareAlike license, unless stated otherwise. Cite this article:
Hillsborough disaster Facts for Kids. Kiddle Encyclopedia.