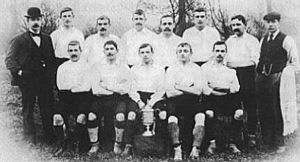 Nottingham Forest Football Club, often referred to as simply Forest, is a professional football club based in West Bridgford, Nottinghamshire, England. Forest were founded in 1865 and have played home matches at the City Ground since 1898. They compete in the Championship, the second tier of the English football league system. They are currently the oldest club in the Football League.

Forest have won the League title once, two FA Cups, four League Cups, one FA Charity Shield, two European Cups, and one UEFA Super Cup. Their most successful period was under the management reign of Brian Clough and Peter Taylor between 1976 and 1982. The club have mostly competed in the top two league tiers during their history except for five seasons in the third tier.

All content from Kiddle encyclopedia articles (including the article images and facts) can be freely used under Attribution-ShareAlike license, unless stated otherwise. Cite this article:
Nottingham Forest F.C. Facts for Kids. Kiddle Encyclopedia.