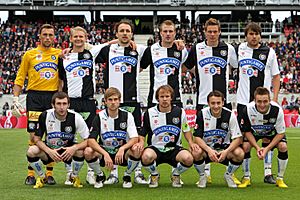 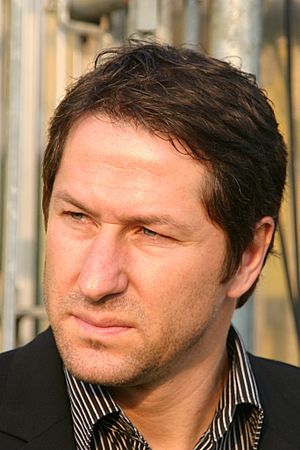 S.K. Sturm Graz is a football club which plays in Austria. He was founded in 1909 and the coulors ar black and white. Therefore they are nicknamed the "Blackies".

The club was founded on 1 May 1909. It was founded by pupils between 16 and 18. The official foundation of the club was in 1912. From 1921 to 1949 Sturm won the styrian championship 11 times. During German occupation the club played his first season in the highest division, the Gauliga Ostmark, but was relegated the same year. 1949 Sturm entered the national league as first team which came not from Vienna. In 1981 the team had the first success, it finished second in the league and reached the quarterfinals of tne UEFA Cup.

With the new president Hannes Kartnig a new successful era started. In 1994 Ivica Osim became coach of the team. 1995 they finished second in the league and 1996 they reached their first title, the Austrian Cup beating Admira Wacker. In 1998 they reached the first title. In 1999 they also won the league.

After this success some key players left the club and also coach Ivica Osim. Since 2005 Sturm had financial problems. Therefore Sturm was forced to play with young players. Under Franco Foda this way was successful, Sturm is one of the top four teams in the league. In 2010 they reached the third title and played in the qualification for the Champions League but lost in the play off round against BATE Borrisow and play this season in the UEFA Euro League.

All content from Kiddle encyclopedia articles (including the article images and facts) can be freely used under Attribution-ShareAlike license, unless stated otherwise. Cite this article:
S.K. Sturm Graz Facts for Kids. Kiddle Encyclopedia.