Ernst-Happelstadium- most of the finals since 1931 were held here 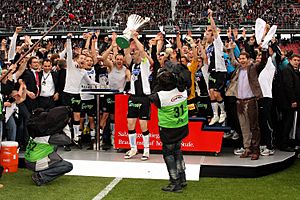 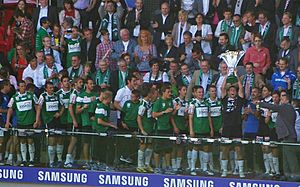 The Austrian Cup (German: ÖFB-Cup) is an football (soccer) competition held by the Austrian Football Association, the ÖFB. It was played by male teams. For women there is the ÖFB-LadiesCup. Although it has a long tradition the Cup never played an important role in Austrian football.

The Austrian Cup emerged from the Lower Austria Cup (Niederösterreichischen Cup, held 1915–1918). The first cup was played 1919 and was held since then each year. Only from 1938 to 1945 it was suspended, because Austria was a part of Nazigermany. Also from 1950 till 1958 there was no competition because the ÖFB was not interested in. In 2008 the clubs of the Bundesliga and the first division did not take part due to the UEFA Euro 2008.

17 different teams had won at least one time:

All content from Kiddle encyclopedia articles (including the article images and facts) can be freely used under Attribution-ShareAlike license, unless stated otherwise. Cite this article:
Austrian Cup Facts for Kids. Kiddle Encyclopedia.