The UEFA Super Cup started in 1972, with the winner of the Champions Cup playing against the winner of the European Cup Winners' Cup. It was not recognized by UEFA because it had a team that was banned from UEFA competitions, Rangers F.C.. Since there was no stadium chosen to host the game, they played one match at one team's stadium, and one match at the other's. In 1973, the first Super Cup final to be recognized by UEFA was played between Ajax and Milan. On aggregate (the added score from the 2 matches), Ajax won 6-1.

In 2009, the UEFA Cup was renamed the UEFA Europa League. The tournament stayed the same. 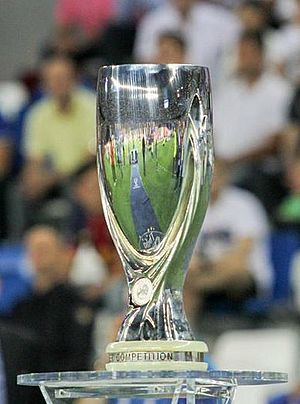 The trophy being presented before the UEFA Super Cup final in 2015.

All content from Kiddle encyclopedia articles (including the article images and facts) can be freely used under Attribution-ShareAlike license, unless stated otherwise. Cite this article:
UEFA Super Cup Facts for Kids. Kiddle Encyclopedia.