Lionel Andrés "Leo" Messi Cuccittini (born 24 June 1987) is an Argentine footballer. He plays for Barcelona and the Argentina national team as a forward. He also has Spanish citizenship, meaning he can play for Spain. Many experts and critics consider Messi as one of the greatest football players of all time. Some even say he is the greatest player ever. Messi has 6 Ballon d'Or awards, the most of any player, and one more than Cristiano Ronaldo. His playing style and skills are very similar to the Argentine legend Diego Maradona. There is much competition between him and Portuguese footballer Cristiano Ronaldo because of their similar skill levels. 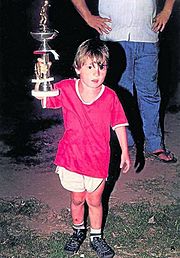 5-year-old Lionel Messi with Club Abanderado Grandoli of Rosario, where he started to play football

Messi was born and raised in Rosario, Argentina. Messi is the third of four children of Jorge Messi and his wife Celia Cuccittin.

At the age of four, Lionel Messi joined his local club Grandoli, where his father Jorge Messi used to coach him, though the influence of football came from Messi’s maternal grandmother, who always went to training grounds and matches with Lionel Messi.

Lionel Messi always supported the Newell’s Old Boys and at the age of six he joined the club, he played six years with the club and in that tenure, Lionel Messi scored more than 500 goals for the club, and Lionel Messi was also a part of the “Machine of 87”, an undisputed youth side who were named on the basis of their birth year.

The “Machine of 87” used to entertain the crowd by performing some ball tricks during the home games, but at the age of 10, Lionel Messi’s career as a professional player was threatened as at that point of time he was diagnosed with a growth hormone deficiency, his father’s insurance only cover for his two years treatment, which approximately cost  $1,000 per month and at the first place Newell’s Old Boys agreed to pay the bills but later they renegade.

The Argentine giant's River Plate scouted him, where his Idol Pablo Aimer used to play, but they were also unable to bear the medical allowances for him due to economic collapse in Argentina.

Lionel Messi has some relatives in Barcelona and they ask him to come over at Catalonia to arrange a trial with the Barcelona team in September 2000, at that point of time Barcelona first team director  Charly  Rexach wanted to bring him in the squad but the board of directors hesitates as at that point of signing a foreign player at a tender age was bit unusual for the European clubs. 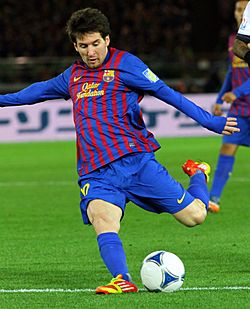 Messi about to shoot

Messi began football at a young age and his potential was quickly seen by Barcelona. He left Newell's Old Boys' youth team in 2000 and moved with his family to Europe for Barcelona. They moved to Spain because Barcelona offered treatment for his growth hormone deficiency. He started in the 2004–05 season, and he scored his first goal on 1 May 2005 against Albacete from an assist by Ronaldinho. The goal made him a the youngest-ever scorer for the club at that time. Barcelona won La Liga that season for the first time in 6 years, and won the league for a second time in a row along with the Spanish Super Cup and UEFA Champions League in 2006. His first very good season was in the 2006–07 season; he became a first team regular, by scoring a hat-trick in El Clásico. He scored 14 goals in 26 league games. Maybe his most successful season was the 2008–09 season. In this season, Messi scored 38 goals. In the following 2009–10 season, Messi scored 47 goals in all games. That equals to Ronaldo's (Brazilian) record total for Barcelona.

Messi decided to play for his homeland, Argentina, in 2005. He led the team to the final game of the 2005 U-20 World Cup against Nigeria, which ended in a 2–1 Argentine victory. Messi scored two penalties as his national team won the U-20 World Cup. In addition to the gold medal, Messi was awarded with the Golden Shoe for most goals scored (6), and Golden Ball for best player. Messi was made captain of the national team in 2011.

On 26 June, Argentina once again lost to Chile on penalties in the Copa América Centenario after a 0–0 tie. Messi missed his penalty in the penalty shootout. This was Messi's third consecutive defeat in a major tournament final with Argentina, and his fourth overall. A day after the match, Messi announced his retirement from international football.

He came out of retirement in October 2016 for the 2018 World Cup qualifiers.

After a slow start to the 2018 FIFA World Cup, he helped Argentina qualify to the next round of the competition by scoring the first goal in the 2-1 win over Nigeria.

Messi has three children with his wife Antonella Roccuzzo. They are named Thiago Messi, Mateo Messi and Ciro Messi. Thiago was born on 2 November 2012, Mateo was born on 11 September 2015 and Ciro was born on 10 March 2018. On the bottom of Messi's cleats is the name of his first son, Thiago.

Messi and Antonella married in June 2017.

When not playing on the field, Messi finds time to do charity work. He started the Leo Messi Foundation in 2007 which helps children in at-risk situations. Messi also opened a kids park for children living in a hospital in Barcelona.

All content from Kiddle encyclopedia articles (including the article images and facts) can be freely used under Attribution-ShareAlike license, unless stated otherwise. Cite this article:
Lionel Messi Facts for Kids. Kiddle Encyclopedia.