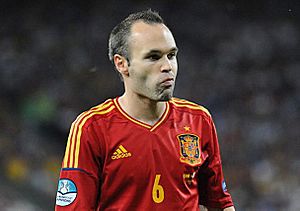 Andrés Iniesta (born 11 May 1984) is a Spanish football player. He plays for Barcelona and the Spanish national team. He is known for scoring the 2010 FIFA World Cup winning goal against the Netherlands in the 116th minute of extra time. He is regarded as one of the greatest midfielder of all time.

All content from Kiddle encyclopedia articles (including the article images and facts) can be freely used under Attribution-ShareAlike license, unless stated otherwise. Cite this article:
Andrés Iniesta Facts for Kids. Kiddle Encyclopedia.