Before 2016, Iceland had never qualified for any major tournament. They got close in 2013, but lost to Croatia in the 2014 FIFA World Cup play-offs.

They qualified for the UEFA Euro 2016 after finishing as runners-up in their qualification group. They went on to finish at 2nd place in their group during the group stage, and went on to face England in the round of 16. Even though they were the obvious underdogs, they beat England 2−1 with goals from Ragnar Sigurðsson and Kolbeinn Sigþórsson. Their momentum ended when they lost to France 5−2 after being down 4−0 at halftime. 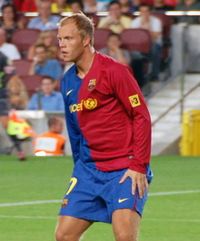 All content from Kiddle encyclopedia articles (including the article images and facts) can be freely used under Attribution-ShareAlike license, unless stated otherwise. Cite this article:
Iceland national football team Facts for Kids. Kiddle Encyclopedia.