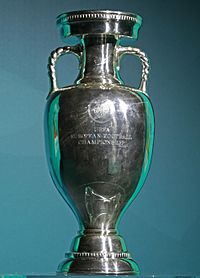 The UEFA European Football Championship, commonly known as the UEFA European Championship and as the Euros, is the main association football competition played by the senior men's national teams of the members of the Union of European Football Associations (UEFA). It has been held every four years since 1960, in the even-numbered year between FIFA World Cup tournaments. It was first called the European Nations' Cup. It changed to the current name in 1968.

All content from Kiddle encyclopedia articles (including the article images and facts) can be freely used under Attribution-ShareAlike license, unless stated otherwise. Cite this article:
UEFA European Championship Facts for Kids. Kiddle Encyclopedia.